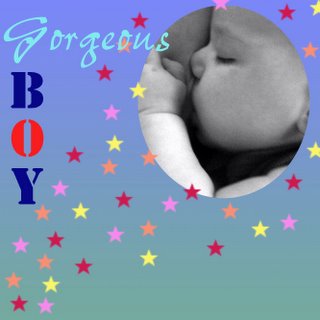 This is my beautiful baby boy, Bryn (which is sort for Brynjar (Icelandic, meaning breastplate))... Bryn is the youngest of my three boys. He will be 5 months old in just two days time, and I can't believe how quickly the time has gone. He has been a pure delight to have around. We generally call him Buddha, because he is so round and placid and calm. Not to say he doesn't know what he wants or how to communicate his needs to us, but he is just so easy going.

Our house is fairly chaotic, with two older boys running around most of the time. Both Dave and I tend to be fairly loud and expressive at home, which only ever adds to the noise and bussle around the place, and yet Bryn never seems phased by any of it!

When Dave and I had been together for a few weeks (this is going back ten years now), I had a couple of dreams about our children - the children Dave said he never was going to have :) - from then on I know we would have three children; with the first two being born two years apart and the third being born four years later. And so it came to pass, as they say. It took ten years and much convincing and conjoling on my part, but finally Dave relented and we had each boy in turn.

I had felt the "presence" of each of my children before I had them, and when Bryn was born, I felt no more "presences".

Then about two weeks ago, I started to feel that feeling again, and when I went to bed I "saw" two girls giggling around me (now, I must point out gender is not important here, because I saw two of my boys as girls before they arrived and obviously they turned out to be boys)... The two girls were girls as if they had a secret, or they had just surprised someone, or were being tricky.

I felt rather confused, because for ten years I'd believed I was meant to have three children with Dave, and now I had them and felt content, like a project had just finished... So, I consulted my Angel cards, asking for a clear answer to the question, "Are there any more babies in my future". I drew a single card for response, and the response was that a happy new addition would be joining our family. Now obviously Dave doesn't want any more children, nor do I have any desire to push him into having any more children, so I asked how Dave would deal with it all. The card I drew said to put yourself in the other person's shoes and show empathy. My understanding of that was if I didn't push him, he would decide he wanted more children on his own, for his own reasons.

So, going with the message I was given in the first week of this year, that this year is all about manifesting your thoughts and wishes, I have said, I want more children, but I will wait for Dave to come to me and suggest we have more children, and I believe he will come to this desire himself, in his own time, for his own reasons.

I was curious as to why I hadn't seen these two children ten years ago, and the answer came back that 5 children would have been too great a challenge for me to convince Dave of, and enough for him to outrightly say no to without experiencing having children at all.

Now, I also think I understand why the two girls are laughing, they've been waiting for their chance to be seen, knowing all along I didn't know they were there, big joke, ha ha!

There you go, I've said, and now you can all snigger into your keyboards...

All last year I felt I was coming to the end of an era. something new was around the corner and I was justing waiting... Waiting to hear what was next. Well, I drew a reading based on the question, "Where do I go from here?"... The answer I got was that I was waiting to be told what to do when the universe was asking, "What do you want to do?" But, you see, I couldn't think of anything I wanted to do that would be as fulfilling, as motivating as what I had just done in the previous several years, namely having and raising children...

at January 14, 2006
Email ThisBlogThis!Share to TwitterShare to FacebookShare to Pinterest

Ahhh Sif your boy is so lovely :D

And I am intrigued by these cheeky girls of yours! When I had Emma I thought I would feel 'complete', as DH and I have 'known' forever that we would have our son and our daughter, and that would be it for us.

And as you know I have NO intention of more children in my head... but there is a girl who haunts my dreams and whispers to me when I pay attention... just lets me know she is there...

Maybe I need to consult your cards too!

Will look forward to your musings :D

Sif, you know that I would love for you to tell me you're pregnant with a girl. I smile when I think of those two cheeky girls sniggering after being'seen' by you! How delightful.

About time you blogged :)