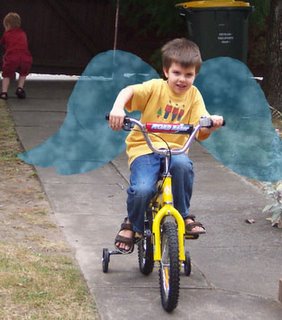 Well, I've spent most of today playing around with photoshop, trying to put wings on my kids!


It's just a beginning, but it's been fun - well, sort of fun. I really shouldn't try to concentrate on this stuff while the kids are awake, way too many distractions, but then again, lately there hasn't been a time between 5.30am and 1.30am when one or another of them isn't awake!

We don't usually have this problem, but Buddha has been teething and well, while he isn't too cranky with it, it does seem to prevent him from sleeping deeply, and consequently he is waking often, and this past week he has woken around 10pm-ish and just stayed awake for a couple of hours.

Needless to say, Dave and I are pretty wrecked. I keep thinking I should hop into bed before 10pm and then I'll be in bed when Bryn wake and can feed him back off to sleep before he manages to rouse himself enough to stay awake, but then 10pm comes around each night, and I'm just dying for some me time, LOL Anyway, it's not every night, but it has been about 3 times this week. 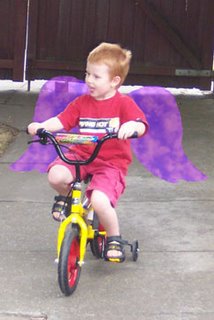 Still and all, I'm feeling such a strong need to create atm, I've been knitting away like crazy and have over 20 hats so far... The idea is, of course, that I'm going to take these hats to the markets and sell them with Jayne and her slings, but I'm a little nervous about the whole idea that someone is going to pay money for something I've handmade. I can see imperfections in every hat I've knitted so far, but others I've talked to think I'm being a bit too much of a perfectionist and at some point I have to let go...

Playing around with photoshop, and doing this blog are both creative outlets where I'm really only pleasing myself (and if you like what you see then all the better :))...

What I really should put more effort into is my photography and writing. I wrote three articles last year, but so far only one has been published (one may be publish in the next couple of months, and the third was completely unsolicited and is probably already in some editors bin!)...

I was thinking of doing another writing course, and perhaps preparing to do a Masters in Writing - though I can't for the life of me think of a thesis project of the top of my head at this point. I need to investigate that further. The Masters in Writing at Melbourne Uni looks interesting, and I already have my Masters in Education from there, so hmmm, I don't know, maybe that will help me be accepted into the degree???

As for the photography, having the digital camera these past two years has been great, but now I'm feeling the need for something I have more control over. The photos from the digital are often overexposed or underexposed because the flash is too strong, or there is not quite enough light to go without the flash, and a lot of the subjects I like to cover require a natural lighting effect, but come out underexposed on the digital camera - I could also really do with a tripod..

Can I manifest a camera? While I'm at it, I'd like to manifest a laptop computer for myself, so Dave can stop hovering over me while I "play"... 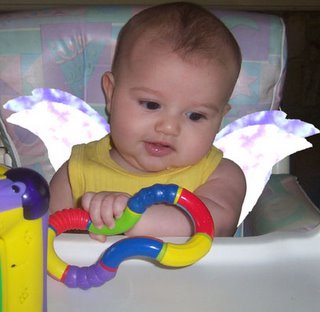 Did I mention that, for me, this is "The Year of Sif"? This is the year where I get my temple in order (that is the house of my soul/spirit)... Of course, like many thousands of others around this pretty little globe of ours, that does involve losing weight - hey, 100kg on a 5'4" frame isn't exactly healthy now...

However, that is not the be all and end all of this quest of mine. As I see it, from the beginning of the year I have 50 weeks until my 35th birthday (you're getting to know quite a lot about me in this post, aren't you;))... So, I'm breaking it down into weeks, and instead of following some prescribed diet (which I'm not going to stick to because I'll convince myself it's boring, even though eating Maccas five times a week isn't boring, hehehehe), I will add something new each week towards becoming more healthy, be it cutting out something crappy from my diet, or adding some exercise, or starting to do meditations. That way, I keep focusing on the positive stuff I am doing, rather than on everything I might be doing "wrong". Also, it takes the pressure off to be "perfect" from the get go...

So far this year I've:

This is the year of manifestion and I believe I will achieve everything I think of :D!

Speaking of which, I should say, we're two weeks into the New Year already and I haven't had any cravings for any of the stuff I usually binge on without thought, so there you go, the Universe is working with me to achieve my goals!

at January 15, 2006
Email ThisBlogThis!Share to TwitterShare to FacebookShare to Pinterest

Love love LOVE those wings!!! Oh and on the writing front... we have a very close friend who is from Europe and has soooo many great stories from growing up in various countries....we sooo need someone to write them down, would that be a thesis topic or does it have to be something more academic??