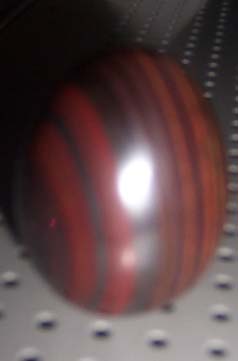 No, I'm not about to write about golfing, so if you're a golfing enthusiast, you might as well mosey along...

This is my Tiger Iron egg. It's not very big, fits into the palm of my hand very nicely, but I'm beginning to sense it's a fairly potent crystal! Here's my story...

The blurb that came with the Tiger-iron stated the following,

So, anyway, because I was feeling very much at a low ebb today, energy wise, I decided (after Dave got home from his meeting and Bryn was having a nap) to do a shortist meditation and card time, and then have a nap with the Tiger Iron tucked under my boob (yeah, those National Geographic boobs are endlessly useful for storing stuff under...).

So, off I doze into byesy land, it wasn't a particularly deep sleep (in fact, I felt like I was still trying to get to sleep), but about 40 minutes later I stirred because I could feel this pulsing, vibrating sensation. I was somewhere in that no-mans land between not asleep but not fully compis, and I could feel this faint vibrating that would come on for about 5 seconds then go away for 3-4 seconds, then come back. My teeth were vibrating. I let myself rise further up into consciousness trying to figure out what was causing the vibrations - no, my mobile was in the pram in the hall, and I couldn't hear any electrical appliances or power tools going...

Then it dawned on me that perhaps the Tiger Iron had activated, and perhaps being in such close proximity with the Clear Quartz (which was in my pendant, around my neck) it had started to hum... I tried to drift back off to sleep by the vibrating became more pronounced, so I removed the Tiger Iron from it's pozzie under my boob and put it under my pillow, and the vibrating stopped and I drifted back off to sleep!

That's the first time I've ever experienced anything like that!

I received a message the other night that I am no longer Indigo, I've been working on myself fairly intensely for over a year and slowly been gaining a higher consciousness/awareness. I'm VERY comfortable with calling myself an Indigo, but that is now my past, that is what I was and what I needed to be to get through my childhood, adolescence and early adulthood.

When I my meditation and cards this afternoon, I repeatedly got the message that I need to let my past be my past and embrace my new future. First the number 225 popped into my head and I referenced the Angel numbers book and it said,

Trust that this change is for the best, you're in a period of transition -
letting go of the past and that which is no longer working. Let go and
move forward with confidence and faith.

Then I drew an angel card and got Isaiah, which said,

It's a good time to give birth to new ideas and situations in your life, I am
watching over you, guiding you and protecting you during these changes. (there
is more, but this is the basic message of the card)

Then, I felt confused, because I still didn't really understand the message, so I drew again and got Archangel Michael, which said,

I am with you, giving you courage to make life changes that will help you work
on your Divine life purpose.

Ok, now you'd think I'd gotten the message by now, but I was feeling a little energy drained remember, and a little dull in the comprehenion office of the brain, so I finally drew a Goddess card, and got Artemis, which said,

You and your loved ones are safe and spiritually protected.

Like me you have a sacred mission to spread love and light. Yet thisisn't a position that comes from tension or worry. Instead the gentle essence of a joyful heart and lighthearted laughter sets your power into
motion. Why would there be any tension in your mind or system unless
you believed you were unsafe? And how could you be unsafe when you
have called upon the spiritual warriors to watch over you? Your
prayers have activated the flawless protection of Heaven. So, ease
your mind of all cares and concerns, and concentrate instead upon your holy
mission.

So, it seems I'm no longer an Indigo, I'm a Crystal or a lightworker (I'm not sure which), I have been for a while, but now my transformation is complete because I've accepted the messages coming to me and cast of my cynicism.

I think my fears have been that others (my friends) might think I've lost the plot, LOL... But I'm interested in converting anyone to my way of thinking, I believe there are endless ways to partake of Spirituality, all are valid! There are many languages and cultures, so why not many paths?

at January 23, 2006
Email ThisBlogThis!Share to TwitterShare to FacebookShare to Pinterest

lost the plot?? far from it! I am in awe of you most of the time... you seem to be so much more in tune and in touch with things and places I'd like to be but just can't seem to make steps in the right directions....

And tell me where you buy your crystals?? I was a bit 'into' the idea of crystals when I first had TTTS though I wasn't allowed out to buy any and felt too stupid to ask anyone...

Atm, I'm really just getting into this myself. I'm buying from ebay stores, my favourite is concentric-circles (if you look under metaphysical in the ebay categories and then type in crystals, you should be able to source some stones to that ebay shop)... And I'm doing research online (if you google crystals, there is a whole new world out there)... It's fascinating, there are hundreds of varieties out there!