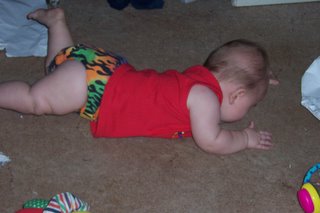 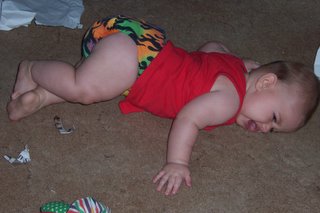 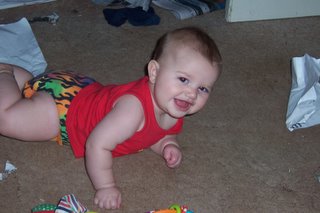 He's officially "creeping" to get to stuff!!!

He spies something and reaches for it, but can't quite reach, so why simultaneously voicing his frustration, he puts his head down and drags his bum up in the air, pushing off with his toes and then lifting his head... Millimetre by millimetre he gets closer until his grasps the object of his desire...

As you can see, it's pretty frustrating for him, but he just keeping plugging at it, and as you can also see from the bits of paper around him, he slowly but SURELY always manages to reach his goal!!!

Bryn has beaten his brothers in the creeping stakes by 3 and 2 months respectively!!! I keep forgetting this but he is only 6 months and 1 week old (he seems so much older because of his size)...

Darn good effort there, little man!!!
at February 23, 2006
Email ThisBlogThis!Share to TwitterShare to FacebookShare to Pinterest

oh gosh I love that boy!!! He is too scrumdiddilyumptious!!