Something to smile about... 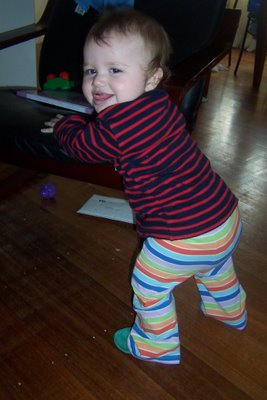 After my self-pitious post this morning, I feel the need to refocus on the things that make me feels wonderful... Like little Mister Buggy-boo here! This is a pic taken about two minutes ago of him cruising around the furniture! He is so intent on walking now! His absolute favourite thing to do atm is walk holding someone's hand - just one hand, so he can walk "forward" next to them! He's pretty unsteady still, but resists people trying to grab his other hand and "leading" him...

Oddly enough, he STILL won't sit himself down from standing, he'll stand and stand, and then start whinging for someone to help him sit. As soon as you have your hand on his arm, he'll bend his knees and drop, so he knows what to do, but he doesn't want to do it by himself, I suppose, because he doesn't want to risk over balancing and smacking the back of his head on the floor.

He has accidently plopped on his bum a few times now, without falling over, but he cries when that happens, out of shock I think, and we all clap and cheer and try to jolly him, but he doesn't like the sudden drop.

It's so cute to see him cruising though!
at July 28, 2006
Email ThisBlogThis!Share to TwitterShare to FacebookShare to Pinterest

Where did you get those fabulous pants?? And I love love the two different stripey pieces put together. Not many people would be brave enough to do that and look what they'd be missing! Sorry to clothes gush but it is not very often i get to see other kids dressed differently and spunkily. Is that a word? Anyway what a beautiful kid he is. :)

They're girls leggings (wouldn't you know, because boys don't wear flairs), I bought of ebay for about 3 bucks!

Besides dressing Bryn in as many bright colours as I can find, I have fallen in love with stripes on him (which is why I have about 15 pair of stripey leggings and pants for him in all sorts of colours)... So, anyway today's outfit was picked by Dave, but yeah, I thought it was a great choice too, LOL...

LOL, I could rave about this all day... I used to moan about not having a girl to dress up and then I realised I didn't need a girl...

Yes I've often thought that when people say they want a girl to dress up. I think why can't I dress up my boy? I LOVE bright colours and stripes too. I think it shines a light on their lovely baby skin.