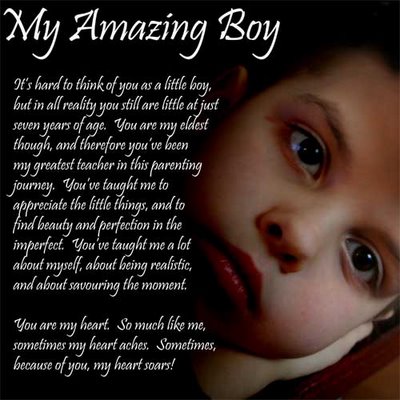 I just had to pop this LO in here because I was so happy with it. When I took this photo of Erik I knew it was special, but when I saw it on the computer, and later played with it (putting shadow around his chin, and blacking out the mask on his forehead, I KNEW I'd captured Erik's essence!

Many people don't see this side to Erik, but I feel it every day. It can be hard to detect amongst the high jinx and incessant chatter, but this boy is soulful, a deep thinker, and even deeper feeler. He connects with everyone he meets on a very deep emotional level, and feels what they are feeling. Sometimes he doesn't understand the feelings he senses in other, and then he tries to get them to clarify their feelings by pushing them to act on their emotions. Sometimes people feel overwhelmed by him because of this, as he reflects back to them their own emotions - sometimes emotions they themselves are yet not aware of.

He has done this to me many times.

Erik is never passive on any instant in time, he always feels his emotions deeply and wholly. When he is happy he is bursting with happiness. When he is sad, the world is awash in blue. His sense of justice, whether for himself or others is very strong and he will get very upset and wound up until he can convince the other person of the need to be fair.

He guards his privacy with the courage and conviction of a soldier going to war, and likes to be sure than he has a place to retreat to and a place to keep his treasures safe! Despite early fears on my part, he has a strong sense of personal boundaries, now at age seven.

Sometimes I forget to give this child his dues, and so doing this LO gave me a chance to reflect on what a marvellous person Erik is.
at August 19, 2006
Email ThisBlogThis!Share to TwitterShare to FacebookShare to Pinterest

Oh what a lovely piece about Erik. He sounds like a wonderful person and he has such soulful eyes. :)

I love how you call him your first child. My mum still calls me that and I love it.

Oh Sif this is SUCH a gorgeous layout and journaling... what a perfect picture of Erik too, I think you're right, you completely captured his essence in that shot!