Can I just say. Dave is usually a very reluctant "culler". He comes from parents who hoard, LOL, and it's part of his nature, or at least that is how it has seemed for the past 12 years... I'm always the one to order and pay for the skips and to organise what will be culled, and he usually has to be "convinced" to part with stuff...

But today has been very different. When I decided the 5.5 year old packing boxes in the garage had served their purpose and were now taking up space, I honestly thought that was all we'd be culling from the garage. To my surprise, Dave has pulled 3/4s of the contents of the garage out, and every old water damaged box contain packing paper and mouldy soft toy and what not has been binned! He's decided a LOT more can go than I could ever have dreamed of! It's all very exciting, rofl! It's like he's finally realised that all I'm trying to do here is simplify our lives a bit by slothing off the dead skin, the stuff we're NEVER going to use again, that is now damaged beyond salvaging.

It's been raining off and on this morning, but the sun has finally come out again. We're stopping for lunch, but I have high hopes that we'll get this done today, and then we can reorder the bedroom and deal with the ceiling mould and dust in there tomorrow.

After lunch we have to redistribute all the packing tubs and other stuff back into the garage in a way that we can access clothes and toys in a few months time when bubba and the kids are bigger again. I also still need to move the desk and change table inside but can't do that until the tubs are out in the garage because right now they're standing in the hallway where the desk will go...

Next weekend I'm going to go to Ikea and get one of these... 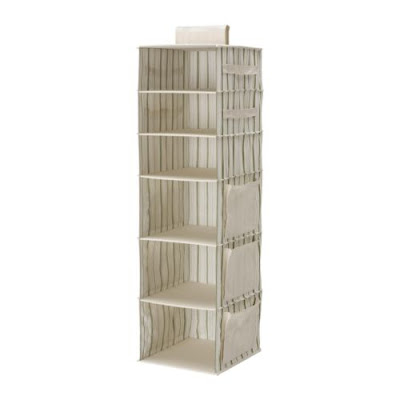 It'll hang in our wardrobe and hold bubba's clothes and things, I think one will do, but at under $20, I could get two, maybe, we'll see...
at September 20, 2008
Email ThisBlogThis!Share to TwitterShare to FacebookShare to Pinterest

So did the scanner get chucked in the SKIP?? That is massive progress on Dave's mindset if it did, not to mention the other stuff he willingly purged! Yay for you for setting him the example, feels great to let go of the old stuff - much better to have your home and contents mostly reflect the present so you can really get on with living - only need a few things to look back on and a few to dream about the future with ...

Yes, it is!!! Although, to give him credit, once the decision was made, he totally went with it, and the nagging from my end was able to completely stop!

Feels good, in its place there is a huge empty tub waiting to be filled with birth supplies over the next couple of weeks! Oooh, I feel another list coming on, rofl...