Today has been a day of new things... Just wanted to share.

The first "new" thing is a co-sleeping "bed" to lay a baby on in the big bed for families who are concerned about baby being smothered or crushed by a sleeping parent or older child. I haven't bought this, but am borrowing it from BaBs - who have received it as a promotional gift from a local distributor who is kindly supporting BaBs financially.

I've co-slept with Luey and Bryn before Ari, and never bothered with anything like this, but with the other two boys, it was Dave and I sleeping in the bed with them, and both of us were very aware of the baby. This time, the other co-sleeping person besides myself, is Bryn. Bryn is very much unaware of the baby, LOL. Nothing has happened so far that has put Ari at risk, but I'm very aware that one night something so easily could because he's never been shy about sleeping ON me, or slinging and arm or leg over my body (for his own comfort, LOL)... 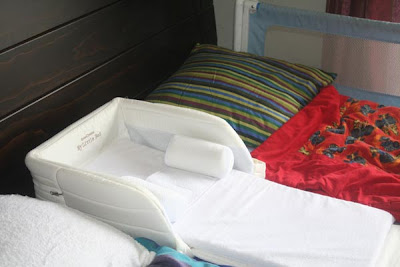 Then my photo order with Snapfish arrived. I'm so impressed with the quick turn around and with how simple it was for me to order and pay and then just sit back and have these lovely TANGIBLE glossies arrive in the mail - and so inexpensive too!!! I'll be doing this regularly from here on in! 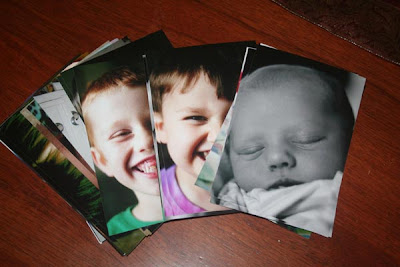 The other mail of the day was my laptop stand. I'd been thinking throughout my pregnancy how much I wished I had a screen on an arm because I'm so near sighted and with a belly it was so hard to read the screen of my lappie as I had to sit further and further away from it, and I was all bend over my belly (which hurt). I ended up mounting my laptop on two Yellow Pages to get it to eye height, but it was still too far away and I got headaches from straining my eyes... I decided I'd buy a second LARGE screen for my laptop with the Baby Bonus...

Then one day I was was A Current Affair and some woman being interviewed was filmed working at her laptop which was on some sort of stand that brought the screen to eye level and brought the keyboard up on and angle, I thought that was SO CLEVER, so I googled laptop stands and discovered they're available ALL OVER THE PLACE (Why hsd I never seen one before???)... I was going to get Dave to buy me one for my birthday, but it turned out to be a rather convoluted procedure (ordering through a store online)... Then I discovered one on ebay that was so economical I could not pass it up. I bought it, and here it is, and it's FANTASTIC, and I can sit so close to the screen!

I bought it from THIS ONLINE STORE... Check out the computer and IT section... I can see they're selling for $7-8 + postage, right now, but mine actually only cost me 99c plus postage, LOL - gee, I was lucky, must have been meant to be! Oh and I don't have mine set up on the highest setting, it can stand almost completely vertical - that just makes the screen too high for me, LOL... 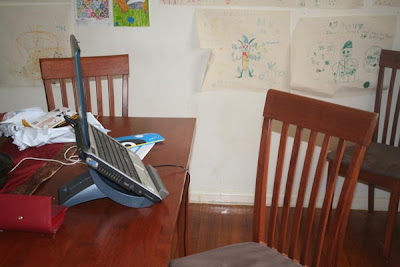 The last thing is not really a NEW thing, but it feels new! I got my couch cleaned today!!! We've had this couch since Luey was 10 months old - so nearly 7 years and it's been treated fairly toughly by three boisterous boys (and their mum and dad, and a few thousand visitors of the adult and child variety)... It was looking PRETTY grotty! So, I finally got my act together and called a dry cleaner and got it cleaned. Again, why did it take me so long, it was such a simple and relatively cheap thing to do!

There are some stains on the couch that just will never come out, but OMGoodness it's amazing compared to what it was!!! I reckon we could get another 7 years out of this couch - and then I want a leather one!!! 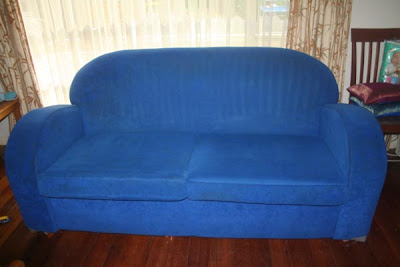 at November 28, 2008
Email ThisBlogThis!Share to TwitterShare to FacebookShare to Pinterest

Who did the couch and how much was it? I want to get mine done too

I used VIP home services. It cost $75 - which he told me several times would have been what the other would have charge to show up (before they started charging for extra time and special stain removing agents, etc. etc.)... I don't know if that is true or not, I just wanted the job done, LOL...

Couch looks great! The co sleeper looks interesting-I kinda wanted one of those when S was a baby, but never got around to buying one. She was fine with the bedrail, but this would have meant she could have slept between her father and I if necessary (who had no awareness of her whatsoever lol).

Might check out snapfish myself, sounds easier than getting pics on my usb stick and taking them down to Big W as I generally do. How much do they charge for delivery?