Highlights from this last week...

Well, another week of the school holidays is over, and we're gearing up for the final full week... It's been a bit warm this week, so we've been stuck inside, and developing a case of cabin fever, but still managed to catch up with friends on the one cooler day the week had to offer... 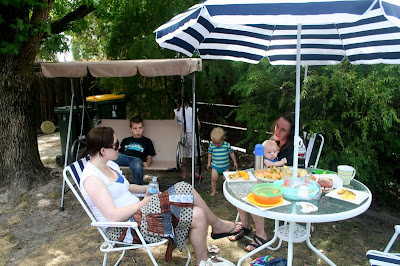 I'm completely LOVING having garden furniture (even though it's not expensive, fashionable wood furniture) to sit on and enjoy the garden with! It's a bit harder this summer with Ari still being small and needing to be held all the time outside, but next summer it'll be EVEN BETTER! 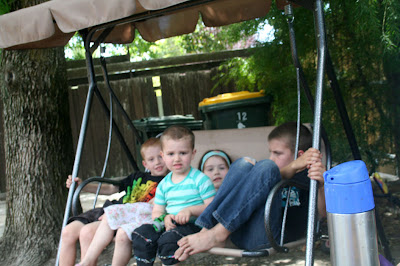 The kids LOVE the swing seat, LOL. My nanna used to have one, I loved the sensation of slouching in it and rocking gently - which is basically why I got, hehehe, and now my kids are enjoying the same sensation! 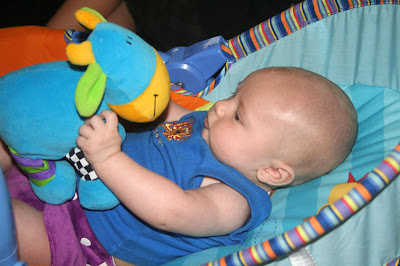 Ari has really gotten into his toys this week, and especially loves his Happy Cow, which he got from Tabitha. This week he's progressed from "holding" things between his two fists, to actually stretching his fingers out to grasp stuff. This picture was taken about halfway through that transition, LOL... 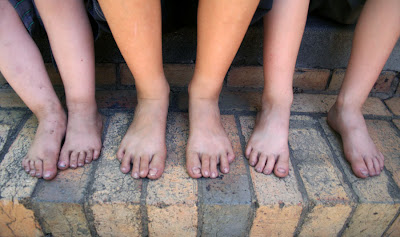 This will be the enduring image of the Summer of 09! My three big boys with absolutely filthy feet! A sure sign of a summer well spent out of doors! BTW, the feet in the middle belong to Erik (if you hadn't guessed) and there are a couple of things to note about his feet and legs. Firstly, the colour of his legs is no trick of lighting, LOL. They are, in fact, orange. Or rather, I should say, copper coloured. It seems Erik has inherited Dave's father's copper skin tone - it's an amazing colour, isn't it? Also, note the length of his toes - they're like fingers! Another trait from his father's side, and finally, those "lying down, curled up" little toes, I'd never seen anything like that until I met Dave! It's funny what people pass on genetically! Both Erik and Luey are also double jointed in their fingers (which totally grosses me out), don't know where they get it from! 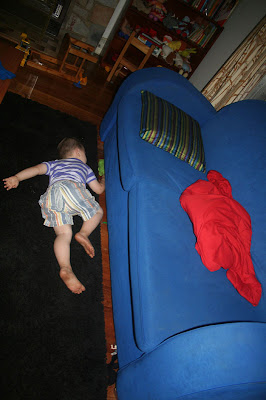 See the pillow and the doona on the couch? That is where Bryn SHOULD be sleeping... But twice this week we've come into the loungeroom to find him asleep on the rug! At first we thought he must have just fallen off the couch but because of the new rug he didn't wake sufficiently to call out. But the second time we found him, he was around the other side of the coffee table, so it seems he gets off the couch and lays down on the floor, LOL! 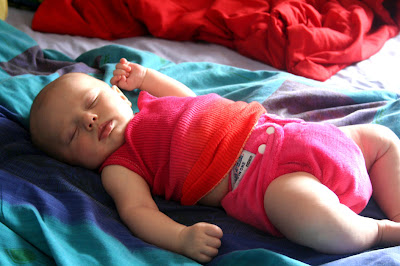 And finally, Ari enjoying a siesta on our bed. I loved the colours in this... Somehow, as Ari gets bigger the pinks and brights I thought didn't suit him before suit him now... Beautiful boy!
at January 24, 2009
Email ThisBlogThis!Share to TwitterShare to FacebookShare to Pinterest