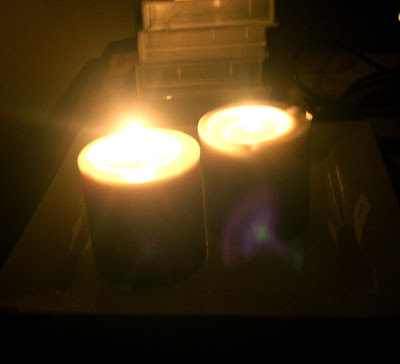 This has been our evenings for the past two days... I've been quite happy with that if the temperature in our house was upwards of 35 degrees!

This is all because they Victorian power supply is not up to standard for dealing with a stretch of 35+ degree days. The Government, of course, is saying they ARE able to deal with the increased demand for electricity, but at the same time, they've admitted to having to "borrow" supply from one area to get another area which has lost supply back up on the grid...

The lack of information to households is appalling.

On Wednesday night it took nearly 1.5hours to get through to the power supplier to report our outage, and then they told us it would be 5 hours until it was up again. It ended up taking another 15 hours, in fact... We were lucky, too... There have been others who have been without electricity for three days! However, it seems the power suppliers aren't too concerned because the outages have only affect 2% of their clientele... Hmmmm, they should try BEING that 2%. It's not pleasant when it's as warm inside as it is out when outside is 35 degrees warm. With four children who can't sleep and are crying or moaning, and saying they feel like they're going to vomit...

Dave's parents haven't been affected by the outages, but that is just as well because Dave's dad has been badly affected by the heat as it is. He is 86 and quite frail these days. On Wednesday he collapsed on a very short trip to the loo. MIL could barely lift him to get him to bed. It's a worry. They don't have airconditioning, but rely on fans, they're getting by atm, but if they didn't have the fans either, well, it wouldn't be good!

The first thing we discovered when the electricity went out whas that our cordless phone didn't work. Luckily for us, we had an "old fashioned" corded phone to plug into our phone socket (and luckily we also had a regular phone socket to plug it into because our usual phone socket has a modified line splitter on it for adsl, so if it had been our only line out of the house even the corded phone wouldn't have worked).

Imagine being elderly, frail, and stuck at home in a heatwaves with only a cordless phone that doesn't work without electricity!

It doesn't bare thinking about!!!

Privatisation is EVIL, I tell you!!!
at January 30, 2009
Email ThisBlogThis!Share to TwitterShare to FacebookShare to Pinterest