When Erik was a baby, he quickly developed very precise fine motor skills. His hand-eye co-ordination was amazing to say the least. His gross motor skills, on the other hand lacked finess. When he was four and Luey was 2, Luey took great pleasure in flaunting his ability to somersault in front of the less well co-ordinated Erik.

When the boys started school a couple of years ago, after the first term, the PE teacher sent home a mini dvd of each child going through their paces with several activities that had been practiced in PE. These included catching a bean bag, throwing a bean bag over arm, hitting a tennis ball with a racket, kicking football and so on. Luey should a natural ability to co-ordinate himself to do these things, but Erik looked all goofy and un-co with his long calf-like limbs...

Then, on the DVD, the boys had to run across the synth grass. Oh my, even in that short a run, Erik fell EASILY into a great rhythm and motion. When I saw that, I said to Dave, "Erik is a natural runner, a real NATURAL"...

Since then, Erik has learned to roller blade, and again, he's a natural. He just seems to know exactly how to move his arms and legs and torso in unison for the most effective and efficient motion.

Well, this year, he's in grade 3 and from grade 3 at our school, all the kids participate in a sports carnival. It's all athletics; running; diskus; hop, step and jump; long jump; high jump and so on... Erik was quite excited about it, and was telling me how he expected to come second in the 100 metres and also high up in a longer run. I affirmed him, saying, I believed he would do very well because he's very good at running.

So today he comes home, and is absolutely GLOWING. He'd come first in the 200 metres! His house (blue - I still don't understand why the houses don't have more imaginative names, especially considering the school is named so well) came second overall. He was so proud of his effort!

Check out the puffed out chest! 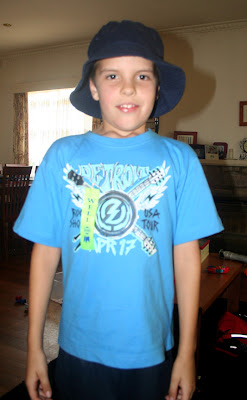 at February 18, 2009
Email ThisBlogThis!Share to TwitterShare to FacebookShare to Pinterest

Thats awesome, good on you Erik !!

Have you considered putting Erik and even Luey into Little Athletics. My boys are long distance runners and athletics does wonders fr them

Juniper said...
This comment has been removed by the author.
10:00 pm

sorry, made a mistake before LOL!

He certainly looks proud of himself - how exciting!

Although I know your feelings on this, I can't help but agree with Nic that Little Aths may be *the* sport for your kids - in particular it looks like Erik may really enjoy it!

Shall chat IRL, but wanted to say - yeah! Shall see you in the morn.

LOL, Nix (with the small "n")... As Juniper alluded to, there is a "issue" in this house with Little Athletics. The issue isn't "my" issue, LOL, but rather Dave's (Dh's). Dave's parents, who were quite sporty, enrolled him in Little Athletics as a child "for fun", but Dave was routinely thrashed in all the various competitions, and he soon came to believe that Little Athletics was actually NOT about having fun, but about encouraging "competition". So, after a couple of years he quit.

Last year, a Paed. we saw for Erik suggested enrolling him in an extracurricula sport, and so we asked the PE teacher which sport Erik might best be suited to, and Dave added the caveat, "A NON-COMPETITIVE sport!"... Roflmao!

So, Dave would have to believe that Erik was DYING to do Little Athletics before he would (grudgingly) agree to letting him do it, because he never wants Erik to feel as discouraged as he himself became as a child.

But yeah, it'll definitely be something to keep in mind if Erik does go on to want to pursue athletics of some variety...

Awww look at how proud he is! That's so cool, Yay Erik!!

I understand Dave's feelings on competitiveness completely. BUT..I think as parents we have to be careful to avoid projecting our own childhood experiences onto our children. I have had to really rein myself in in this regard. Often I'm biting my nails and internally churning with anxiety about something that my children are involved with-which doesn't bother them at all. I really think athletics would be great for Erik, and I doubt he would have the same perception as Dave. It seems E is a natural, whereas perhaps Dave... wasn't ;-) LOL..I know how he feels-my mum tried to get me to do all the things *she* was interested in as a child as extra curricula activities-tennis lessons, piano lessons, brownies. I sucked at all of them lol. I did however love the horse riding, jazz ballet and art classes I talked her into instead :)

So I think if Erik wants to do athletics, I hope Dave comes around, and sees that his experience is not likely to be Erik's...

Yeah, I totally think if Erik asks to do it, Dave will suck it up, LOL...

Mind you, one primary school sports day award does not an athlete make! Hahahaha, atm, he just had fun doing it.

He actually told Dave that the boy who usually beats him in running was sick that day - so it seems Erik feels he also had a bit of luck on his side, not that he cares, he was really excited to win the event anyway :)...

The fact that he enjoyed himself and felt good about his performance was the most important thing, I don't think we have to stress too much about fulfilling his running potential just yet!!!

Aw, look at him! If he was any happier he'd burst on the spot!

I get Dave not wanting him to feel upset if the competative thing takes over from the enjoyment of the sport itself to a point it becomes unhealthy and unenjoyable (actually, would strongly agree with him there) but tbh I'm not sure I can think of any sport that is non-competative? Ones that emphasize teamwork and coordination more than personal victory perhaps but totally non-competative in any form seems a tall order.