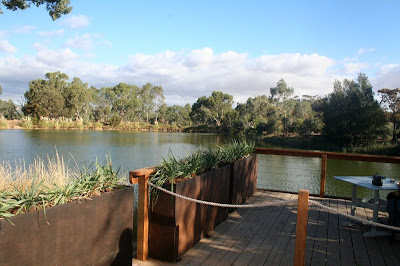 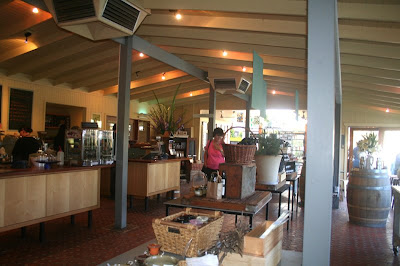 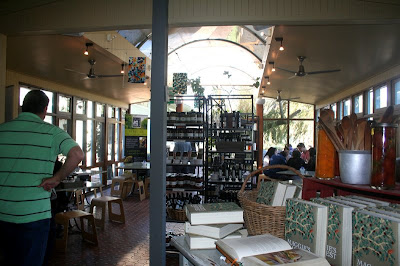 In this household, we've long been great fans of the ABC's "The Cook and the Chef" which airs at around 6.30pm on Wednesday nights.

Just recently, my stepfather discovered that the Cook (Maggie Beer) in fact lives not far from my parents in the Barossa Valley, and has a wonderful farm/restaurant business there.

Last Sunday, after the exciting Graduation was over and done with on the Saturday, I was driven out to Maggie Beer's farm/restaurant as a surprise!

It is located in amongst the vineyards and on a fabulous lake, which there is was walking trail around. In the restaurant are shelves of Maggie's various delicacies, including her signature Verjuice, as well as a variety of scrumptious patés and pastes, and extra virgin olive oil and wines and her books and the list just goes on and on...

At 2pm on Sundays guests can watch a cooking demostration which is often done by Maggie herself, but last Sunday was done by one of her staff, and her granddaughter, Lily because Maggie was busy setting up for another event on the property.

We all had picnic lunches (which her restaurant specialises in) and Erik tracked Maggie down and told her how much we all love watching her show, and how if we miss an episode, we always make sure to catch up when the repeats are aired on the weekend (hmmm, that part was slightly embellished, he was just wanting her to know how much we love her show). He apparently told her it was an honour to meet her (he's such a charmer, LOL)...

In was a fabulous experience and we all left feeling very satisfied with what was to offer on the menu! Ari had so much fun he ended the outing with a table top dance, LOL! 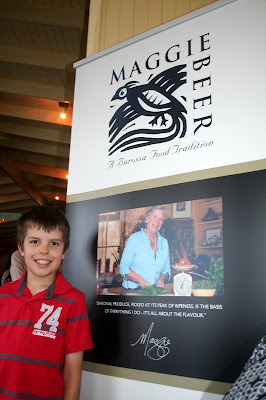 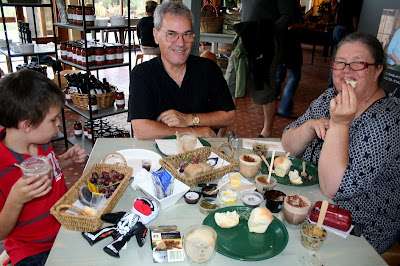 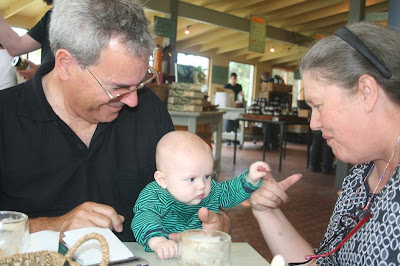 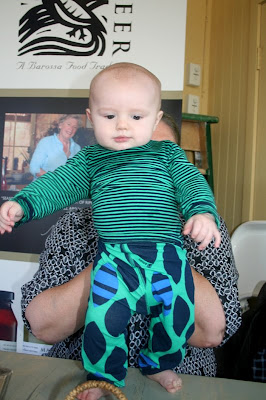 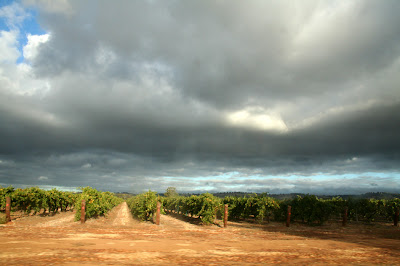 at April 08, 2009
Email ThisBlogThis!Share to TwitterShare to FacebookShare to Pinterest

Ooh I love that show (as does Finn!). What a treat to be able to visit for lunch!

Ohhhhh SA is SO good for eating hey? Great pics babe :D Ari getting so big! He looks gorgeous in that little Bonds set...

Oh I love that show too !! LOL how gorgeous of Erik too !

Kate, yep, very soon, any time you want actually (now that Dave is semi-retired and can take the kids out, hehehe)...


Meanwhile, cool re catch up... once school is back and we're past Em's bday madness would love to come, know Em would love to have a play with Bryn too, she asks me about 'baby boy Bryn' every now and again LOL cracks me up given there is only 4 months btwn them!!

Rofl, that's too funny! She is head and shoulders taller than him (short stuff that he is)...

I just found out this morning there's a new bus route from just up the street from us all the way to Essendon station! Isn't that fantastic???

Awesome awesome!!! So can catch up more often and all!!!