The things you don't expect... 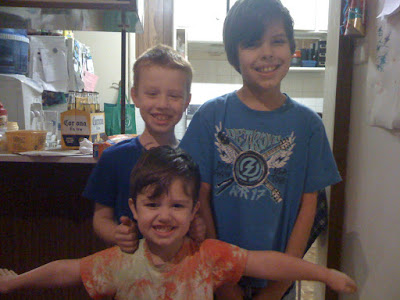 When I had Erik, I sense quite early on that he needed to be with me. Close to me. I carried him, breastfed him, I didn't co-sleep with him because I didn't have the confidence to do so, but basically I was never far from him - in the first 18 months I was never more than an arms length away from him except when he slept.

I knew he would not cope well with childcare or kinder or school, so I planned to homeschool him, and we did so until at 7.5 he asked to go to school. I was worried for him when he first started but he was very confident with his choice.

With Luey I was even more close to him in the first 5.5 years in as much as I did everything I did with Erik plus I co-slept with him.

The surprises started when he was 2.75 years old and ASKED to go sleep in the bunk with Erik. Luey was adamant he didn't want to sleep in mum and dad's bed anymore, despite so many sources of parenting advice PROMISING us he would NEVER want to leave our bed. Then when Erik decided to go to school, we were quite happy for Luey NOT to go, but when we went and looked at the school, Luey announced that he wanted to go as well... Oh dear, this was just not how it was supposed to be. Children were not supposed to want to sleep away from their parents or want to go to school and spend their entire day with strangers!

And it seems Bryn is following in his brothers footsteps.

Despite our best intentions to keep him with us, and to "baby" him and avoid him learning independence, just in the last 24 hours, the following two incidences have occurred:

Ah, LOL, my attachment parented child who I was promised would be dependant on me forever if I didn't teach him to self soothe and who would HATE any kind of care other than my own... What went wrong?

Nothing, I tell you!

This child has always had his every need met. He was allowed to sleep with us until he was ready to sleep in his own bed (he was 3.5 years), and who was only sent to creche because our friends Jayne and Sienna were going to be there, and we already knew the center from having attended playgroup there, and one of the mums from school also works there, and another mum from school sends her boy there, too (in other words, creche is an extention of the rest of his life, not a place he goes seperate to everything else in his life).

Nothing is black and white.

Good and bad is only what you MAKE of it...
at October 06, 2009
Email ThisBlogThis!Share to TwitterShare to FacebookShare to Pinterest

Great to hear he is so secure!

My oldest is a sure sign that AP works - keep them attached when they are little, and all they want is to be independent when they are older - this is what we *want* for our kids huh!

Yup, AP works because it gives our kids the *security* to become independent - but I am finding that although they need us less in some ways as they grow, they still need us in other, sometimes more complex ways yk?