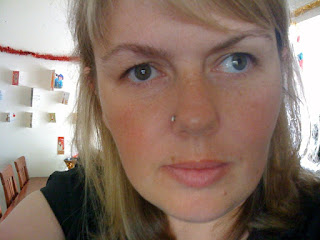 Tomorrow I'm going for a pre-admission appointment at the Royal Victorian Eye and Ear Hospital here in Melbourne.

This journey began when I took myself off to the optometrist in early March to see about getting some reading glasses to alleviate the many headaches I was experiencing at the time.

During the appointment I mentioned to the optometrist that I'd been feeling more and more self-conscious about my left eye turning out. She said she had a colleague who could probably fix that and that it wasn't hard to get the operation done, and not too expensive either. I was very excited at the prospect of getting my eye fixed. It wouldn't improve my sight any because my left eye is completely blind (which is probably also the cause of it slowly becoming lazy). I'm lucky that I don't see out of that eye because with it turning out like that my vision would have been adversely affected.

Many friends and family have said the turn out is barely noticeable, but to me it is noticeable and it is there all the time - I took a photo just before to show the turn out, in case those of you who see me in real life actually believe it's not very noticeable, LOL.

This has caused confusion for me when trying to get service at counters - the staff don't know if I'm looking at them or the person next to them, LOL...

So, anyway my optometrist's colleague was happy to do the surgery, and only for $5000! Might as well have been $5 million, LOL, I didn't have that kind of money for an operation that was basically just cosmetic.

I went back to my optemetrist and she was quite disappointed that the op was going to cost so much and I couldn't afford it. She suggested contacting the Eye and Ear hospital and trying to get on their waiting list.

I got an assessment with them in June or July, I think (it's been a busy year), and they said they'd put me on the list and it would be a 6-9 month wait. So, then I got the phone call two days ago to come in tomorrow for the pre-admission. It's right before Christmas, which is a bit of a PITA, but at the same time I just want to get this over and done with.

I have to admit to being nervous now though. I really hope it goes well, and WORKS LONG TERM (sometimes the effects of the operation only last a very short time and then the eye starts to turn again, but I live in hope that it'll still for long while). I hope I recover very quickly with no infections or complications. My worst fear is of losing the eye somehow, but it doesn't bear thinking about!

I hope the next photo I put up here of myself shows both eyes looking in the same direction. Might be a couple of months until I do that - they like to slightly over-correct so that when the tissues heal and relax the correction is spot on, and also my eye will be very bloodshot for a while...

No more taking 100s of angled photos to try and get my eye to look more or less aligned for avatars! Yay!
at December 17, 2009
Email ThisBlogThis!Share to TwitterShare to FacebookShare to Pinterest

hope it goes well. you are looking very slim in the face, have you lost weight?

Turned eye or not that is a lovely photo of you!
Drove past the Eye and Ear Hospital today and thought of you... hope it all goes smoothly and you get just what you want for Christmas!

Rofl, Kelli, no, on the contrary! I've just become adept at posturing...