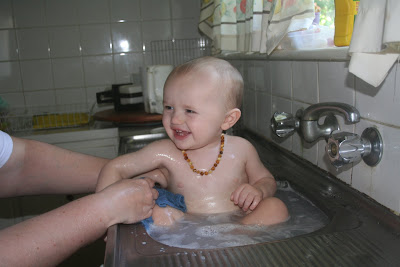 After the untitled, un-worded blogpost below (which was actually just me sending Luey a pic of a hat he could have from our local shopping centre - if he liked it, that was, and he did, so I got it), I thought I'd better post a proper blogpost...

First of all, it's currently 11.26pm, so obviously I didn't get to bed by 10pm tonight either. I had forms to fill in for Bryn's Kinder interview on Friday, and for my course which starts on Monday... For these, of course, I had to sign and date stuff, and that's when I realised today Ari turned 15 months.

He's been walking for five weeks now, since just before Christmas. These days he runs more than he walks. My suspicion that he's be another "runner" like Luey were confirmed this past week when I took him with me to visit my parents in Adelaide. Now, you see, Erik and Bryn were both very content keeping close to their Mama Bear, but Luey was all about, "Getting away to investigate the world"... The positive spin I put on this at the time was always, "Well, he's obviously very confident and trusts I'll always be close by when he needs me"... Of course, being close by meant I had to chase after him. Sometimes he was SO confident, he'd cheerfully go and play hide and seek with me. I wasn't a fan of hide and seek.

So, on the morning we arrived in Adelaide, we immediately went to an airport cafe for much needed caffeine, and the moment Ari's feet touched the floor, he was off. He didn't care that he'd never set eyes on this place before, or that there were multitudes of STRANGERS around him (mostly melting into puddles of goo at the site of his 73cm tall frame toddling along, hands clasped behind his back like a little old man). No, he was beaming with confidence!

Something else happened in Adelaide. Ari sprouted a tooth, his FIFTH (the boy is taking his time with this particular part of his growth)!

New words this past week included, "bread" and "Yay!".

His favourite toys are still balls, anything with wheels and books.

He loves to dance whenever he hears upbeat music, the "bum wiggle" is his favourite move.

"Erk" is the only one of his brother's names he can say, so they're all called, "Erk".

He can throw spectacular tantrums complete with chucking whatever he can get his hands on and growling at whomsoever looks at him the wrong way.

Whenever Dave or I are telling one of the other boys off, he likes to get in on the act. He mimmicks our tone and rhythm perfectly - it's both hilarious and a bit embarrassing...

He loves snuggles, and giving kisses.

Even though he has shown himself to be a bit of a runner, he also - curiously - seems to have a great ability to control his impulses (like Bryn! unlike certain other brothers who shall not be named), so there's hope for him yet!

The poor child isn't really sure what to make of water... Admittedly, he's only ever had a handful of baths in his entire short life, and the same number of showers. Mostly, I've stuck to flannel washes because it's quicker and easier, but recently he had a bath in the kitchen sink for the first time in a long time and it took some convincing to get him to relax... So, have bought a laundry tub and will work on water familiarisation with him some more!

Fifteen months is such a lovely age!

PS. I'm beginning to wonder if I'll get to use my lovely pram until the end of this year, though. He is already keen to walk with us when we walk, by the age of two I'm expecting he won't want to be in the pram at all anymore (again, like Bryn)...
at January 27, 2010
Email ThisBlogThis!Share to TwitterShare to FacebookShare to Pinterest

Oh he sounds just lovely. LOL at the walking around like a little old man, you should post a pic.