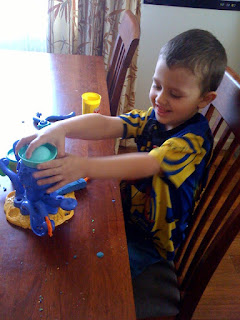 Only 17 days left of the holidays.

You know, I had to look that up! Maybe not seem like a big deal, but usually during the Summer holidays, since the boys started school that is, I could tell you at any time just how many days and hours it was until the kids went back to school. Mostly, I've "endured" school holidays more than "enjoyed" them. These holidays have been different. At first I just thought it was because I'd somehow matured, or maybe the boys had matured, to a point where I wasn't constantly feeling on edge with the kids around 24/7. I thought it might be because I was being kept busy with the eye operation, followed closely by Christmas, and then sorting some stuff out in this house. I thought it might be because Bryn is about to start kinder this year and there is stuff to organise, as well as me starting my course, with stuff to organise for that. I thought it might be a number of things.

Then yesterday morning I realised what actually was making this big difference in how I was experiencing this extended time of family togetherness. It was, in fact, the fact that Dave has been home and with both of us here, we've been able to wrangle the kids, tag-team in refereeing the rather inevitable squabbling, and most importantly, touch base with each other adult to adult throughout the day!

That ability to just have a conversation about a news article or relate an anecdote about a conversation with someone else is a huge stress reliever!

It has also meant that we could get out and meet friends without kids, or with a minimum number of kids... It means I can go and visit my parents in Adelaide for longer than a rushed long weekend and only take Ari!

This last item has been something I've been able to look forward in the midst of arguments over who own which Bakugan, and who should be allowed to wash the dishes this time, LOL.

Having a car would have increased the Summer holiday enjoyment exponentially, but that'll have to be for next Summer. Finances and the lack of a car has meant yet another Summer holiday without a family getaway of any kind, so the kids are a little bored, but the way we see it, even if we did get away for a few days, they'd only not be bored for part of that time, anyway (because it's their disposition to be bored, that's what 8 and 10 year old who expect the world do, I believe)... So, no real loss there, LOL...

But yes, the dayse are steaming by and I constantly lose track of when the holidays will be over, and that's good - well, at least until it suddenly dawns on me that they are over "tomorrow" and I still have so much to organise!!!
at January 15, 2010
Email ThisBlogThis!Share to TwitterShare to FacebookShare to Pinterest