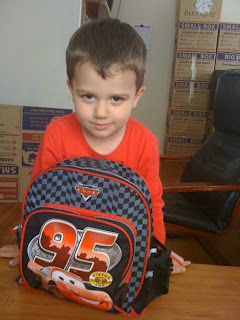 In the past three or four weeks, we've had a few incidents of Bryn going from being happy as Larry to straight out refusing to go to kinder - usually just as we're approaching kinder. The kinder teacher had mentioned last week that Bryn was having trouble settling down to do anything in the room. So, part of the problem might be that all the little boys there are right into Ben 10 and Bakugan and the teacher has asked parents not to let children bring toys to kinder because it becomes distracting... I don't wholly agree with this approach (in my view, it would be better to use this interest to create a few explorations and help the children to move on to other things rather than creating a taboo of it), but we've been doing our best to prevent Bryn from bringing toys. This has involved a bag search, pocket search and then body search as Bryn became more clever about concealing the forbidden items. Seriously, these searchs have often ended in tears and tantrums, and I can't see the point when some inventive and imaginative approaches on the teacher's part would have the same end result without creating a battle of wills.

So, anyway, we told Bryn he doesn't have to go to kinder if he doesn't want to, but he said he wanted to. Dave did the obligatory search of the bag and clothing and felt up and down Bryn's arms for evidence of a concealed Ben 10 mini watch. He found a Bakugan in Bryn's pocket which Bryn sheepishly handed over and then they set off for kinder.

At the bus exchange, after the first bus, it looked like there might be a bit of a wait for the connecting bus but then Bryn spotted a bus we used to take home and said to Dave that if they took that bus they could just walk to kinder for a different direction. Dave was pretty impressed with both Bryn's memory, three digit number recognition AND the fact that he had considered an alternative route to kinder even though he'd never been to kinder using that route before.

So, they got to kinder with time to spare. Bryn hooked up with one of his besties and they ran off to play. After a few moments Dave saw them stop, speak to one another and then carefully, the other boys pulled up the leg of his pants to reveal a hidden Ben 10 watch, and in turn Bryn lifted his own pant leg to reveal HIS hidden Ben 10 watch!

We've been laughing about this all afternoon!

Dave sidled over to the kinder teacher and told her about the body search and then about what he'd just seen, the mother of the other boy was standing nearby and overheard the conversation and gasped in horror because her son had also evaded a body search! Even the kinder teacher had to laugh! The othe boys' watch was confiscated by his mother, but Bryn was allowed to keep his watch for this class.

Got to love those lateral thinking (and forward planning!) four year olds!
at June 09, 2010
Email ThisBlogThis!Share to TwitterShare to FacebookShare to Pinterest
Labels: -