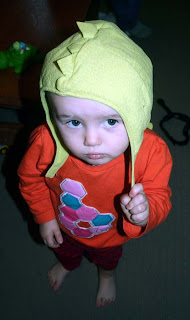 They say all the brains go to the first child...  As a first child, I've always liked this idea!  As a mother, I just don't believe it (that is no reflection on Erik in any way, he has plenty of brains, though sometimes I wonder if he shouldn't employ them more as a precautionary measure)!

I say this because today I whispered behind my hand to a friend that Ari is "our slow child"...  Before you run to fetch that stake and fuel, let me assure you it was said in jest!

Truth be told though, we were in fits of laughter the other night as Ari stabbed as his home-baked chips with his little fork.  He wasn't doing anything inherently funny, I think we were simply relieved that he was doing anything AT ALL with his fork!  For the past 9 months, he as steadfastly held that fork in all seriousness each night while feeding himself with his other hand.  He wouldn't eat unless he was holding the fork, but he seemed determined never to actually USE it!  So, on Sunday night when he used it, we went all giddy with relief and delight!  This led to him turning eating into performance art, holding each chip (or occasionally home-baked crumb fish) high in the air "conquering victor" fashion, as we all fell about in fits of laughter (much indigestion resulted from this lack of self-control, I don't recommend this behaviour at the dinner table - must put that in our family code of conduct contract).

So, ok, it took him longer than the average bear to master cutlery, but we're reassured about his great intelligence in other ways...

Hanging backward of the highchair is not one of those ways...

Today on the buses, he was - as per usual - fascinated by the digital sign inside the bus upon which each new stop is displayed as the bus approaches it.  He squealed with delight when he first noticed it many months ago, and his delight has not dulled one iota in the intervening period.  Today, he patted me fervently on the knee when he saw the display, and again when it changed - gesturing excitedly with outstretching index finger.  So, in typical mother-form, I pointed out the bleeding obvious, "It's changed hasn't it?" And with that he adopted a new word; "changed".  Thereafter, whenever it changed, he announced that it had, indeed, changed.  But he was still very insistently pointing at it, and soon I realised he wanted to know what it said, so then we played this game where it would change, he would announce the change and then I'd tell him the name of the stop.  This pleased him greatly!

So, a woman got on the bus with her baby in a pram.  Ari made eye-contact with the little girl-baby and attempted to involve her in his game.  The sign changed, he pointed at it, looked at her and said, "Changed", and then looked back at the sign, and I told him what it was.  After doing this a few times, he realised the other child had exactly NO interest in the changing sign.  Oh dear! 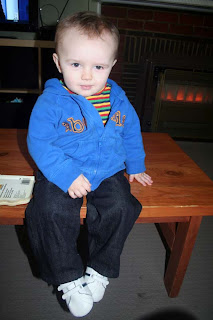 Ok, so it took him a while to master cutlery, but hey, that's not getting in the way of other development - despite him being our fourth, and so by measure of theory that the first child gets all the brains, he's doing great!

Oh, and he's very, very cute, too!
at August 04, 2010
Email ThisBlogThis!Share to TwitterShare to FacebookShare to Pinterest