As I walked home from the bus stop this morning, after yet another enjoyable lecture by Jostein Gaarder (who immediately left for Sydney afterwards), I was struck by this thread of sadness that had wound itself around me as I left Federation Square.

The thread was attached to the joy I have felt these last few days in immersing myself in the Melbourne Writer's Festival sessions, and hearing other people talk about the things that move them and provoke them.  This morning, I had a long held opinion completely turned on it's head by a suggestion that just had not occurred to me over the past few years of thinking about the topic (global warming).

It felt amazing to be challenged like this and to find enjoyment in a new, well argued, point of view that directly challenged my previously held opinion.

Thinking on matters a world away from everything I've been thinking and discussing and debating for the past decade or so was WONDERFUL! 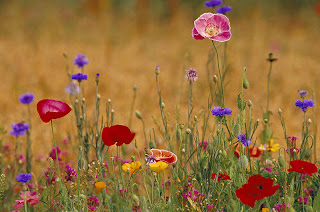 It was like taking my shoes off and curling my toes in fresh, sun-warmed, damp spring soil!  It was a direct connection to the essence of myself.  It made my soul sing with joy, and at the same time it attached a thread of sadness to me that wound itself around me and tripped me up all day long.

The sadness came from the realization that for many, many years now, I've been stuck in a rut with my thinking.  It's not that I haven't been thinking (I can't stop thinking and questioning and wondering about), but rather that I'd been focusing on such a narrow field of questions when there are so many more questions out there; like a field of wild flowers, all gorgeous, all waiting to be picked, but I'd repeatedly picked just a few varieties, the same varieties over and over.

I felt sad about all this time that has passed with me just going back to the same questions over and over until I felt like I'd thought everything I could think about them (which I'm sure I haven't, but sometimes I get completely fed up with my mind playing the same records over and over, even if I did love the music once).

I had a bit of mental break today.  A bursting of the dam, so to speak.  I was sitting and reading and enjoying reading literary fiction for the first time in a long time and I received a phone call from a harassed office worker, who took her frustration out on me, and pressed one of my big buttons at the moment (the feeling that I can never do or say the right thing to people even when I am careful to follow all the rules I've observed about human interaction).

On another day, I might have thought this woman was annoying and full of herself, but today the interaction became the crack that broke the windshield.  I think I probably cried for three solid hours because of this woman's manner, but I realized tonight that it wasn't so much about her, but how interactions like the one I had with her rob me of the energy to think.  I realize tonight that everyday life as a mum and an adult in this society saps me of the energy to wander the field of questions, and the reason I end up picking the same variety of wild flowers all the time is because I never get further than a few steps into the field before LIFE calls me back, and so I only ever have time to pick the blossoms nearest the gate.

When I was younger, I reveled in the world of my own thoughts.  Everything, every interaction with the world and with people was potentially a springboard for a new area of wonder.  Concepts were playthings that I turned this way and that and pulled apart and put back together for fun.  I've always been highly inquisitive and when I was younger I could throw all my energy into those pursuits.

I thought there was no reason whatsoever for this curiosity to end.  I thought I could just take it with me into every aspect of my life.  I didn't realize how tired I would feel, and how much I would long to not have to think about anything because every thought outside what I was DOING or expected to BE DOING felt like betrayal of the people in my life I was trying to keep close and whole.  I just didn't realize that taking care of myself was going to be more than taking a shower, or reading a book, or sleeping in once in a while.  Taking care of me, for me, has to be about being able to walk to the far side of that field and find the rare bloom which isn't immediately visible, that I need time and mind space to look for.  Today, I realized how long I'd neglected myself and how hard I will have to fight to not let that happen again.

I need to work on this.
at September 01, 2010
Email ThisBlogThis!Share to TwitterShare to FacebookShare to Pinterest
Labels: philosophy, Thinking

Thanks for leaving a comment on my blog:) Great article & also very thought-provoking. Many of us spend so much time taking care of others, that we forget to take care of ourselves. And I can completely identify with energy-sapping jobs. It can be so difficult to write or indeed conjure up any imagination after a hard day at work. I'm glad to see that you will try to take some time for yourself:) www.writeolive.com