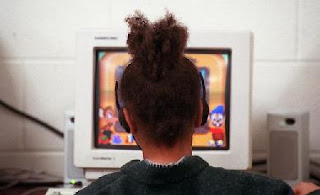 Dave and I caught up on an episode of Big Ideas last night, a lecture by Baroness Professor Susan Greenfield on the plasticity of the brain and how today's screen culture may be creating significant (not always positive) changes in brain development.

She strongly emphasised she was neither a Luddite, nor a technophobe, and that there were evident positives to children's, on average, 2000 hours of screen time (time in front of tv, computers, and hand held devices, including smartphones) per year, however, as she put it, with every gain, there is a loss, and often gains are actually outweighed by losses.

She explained that studies had shown a link between low frontal lobe activity in the brain and issues such as obesity, schizophrenia and reckless behaviour in people with acquired brain injury.  Basically, she said that people who live in a highly sensory oriented way, tend to live more for the NOW, for the moment, and the pleasure of the moment, and be damned the consequences.  Screen based technologies, because they are only able to stimulate two of our senses (sight and hearing) require high impact to compensate for the lack of smell, taste and touch input, to give us the dopamine deposit we seek when interacting with these media.

She said, while short term memory was on the rise, this was at the cost of cognitive higher functions, such as understanding metaphors.  She said it was pretty normal for a child not to understand a metaphor, however, more and more adolescents and adults were unable to grasp these higher order cognitive concepts, in essence, childhood is prolonged by extended exposure to screen based technologies.

She went on to talk about something she called "existential crisis", where by, over time, with the evolution of social networking communities people, adults, were reverting back to the toddler stage...  Many of you will be familiar with the following scenario.

Sitting in a cafe, drinking a latte...
Oh, yum, sounds nice.
Oooh, that waiter is hot!
Better get back to work.
Just got a call from Jack, he's such a dick!
LOL, he sure is!
Geez, I'm tweeting a lot today!
Ok, better do something other than send a million tweets, Bye!
Have a great day!
[several hours later] Wow, I haven't tweeted all day!  I must have a life!

Spot the difference?  No, not really...  Greenfield says sending status updates has become a way of validating ourselves.  I tweet, therefore I am.  If I don't tweet, do I really exist? Furthermore, if I don't tweet, I must point that out to prove I existed while I wasn't tweeting.

I've seen people become irrationally upset because they were unfriended on Facebook or Twitter, and in the light of last night's viewing, I wonder if that isn't because they feel they cease to exist for other people if their status updates at no longer read by those people, however mundane they may be (the updates, not the people).  I certainly realised I have check my own feelings about "friendships" that are based almost wholly in a digital world.  Are friends you almost never see in person and cannot exchange 80% of all communications with (that portion which is non-verbal), are those people really friends?  Or are you merely the cave wall of which bounces the echo of their voice, telling them they really do exist?

In any case, I now find myself reading tweets and often thinking, "I tweet, therefore I am" about tweets that are nothing more than, 'notice me, acknowledge that I exist, even if I'm just sitting in a cafe perving at a waiter...'
at September 20, 2010
Email ThisBlogThis!Share to TwitterShare to FacebookShare to Pinterest
Labels: human development, Philosopy, relationship stuff, Thinking