Pyjama family, or not, which is yours? 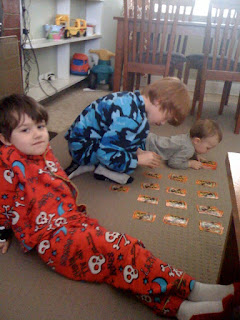 I took this photo this morning on my iPhone (so apologies for the quality, iPhone indoors takes pretty crappy photos, I must say, but I had it at hand (as always) and it was a photo opportunity I couldn't miss)...

When I say "this morning", I actually mean it was between midday and 1pm.  It's a Sunday, and they're still in their pyjamas, which many would forgive because it is a Sunday, and also the first Sunday of the Spring holidays.  That said, it could be 3pm on a Tuesday (if they weren't going to school on a Tuesday) and the picture would be much the same.

Lately, I've become quite conscious of the fact that we're a pyjama family.  Mostly because one of Luey's friends often pops by with her mum directly after school (on their way home) to ask if Luey can come over to play.  After being caught in my pyjamas in the middle of the afternoon on a couple of (consecutive) occasions, I felt compelled (without any prompting from her) to explain that when at home I always wear pyjamas, for comfort.

I once had a friend drop by and find me in my pyjamas at 11am on a weekday, it was an infrequent day off at the time, and she said, "You should relax, just wear your pyjamas ALL DAY!" as if that was some very unusual to do.  I remember I laughed it off at the time, and said something like, "Oh, that wouldn't be something new for me!"  And as I said it, I realised that perhaps wearing your pyjamas whenever you're at home isn't something other people do.  Perhaps, other people get up and get dressed into clothes that they would leave the house in even if they're not leaving the house!

I would never be seen out in public in track pants, or ugg boats, or leggings (even if I had legs that looked good in leggings), but conversely, the idea of having to wear a bra or pants or a skirt, or anything I would wear out of the house while just hanging around IN the house, seems as foreign to me as speaking Klingon at home.

When I'm at home I want to be comfortable.  I want clothes that at unstructured and made of stretchy, flowing fabrics, clothes than don't crush when you curl up on the lounge - pyjamas fit the bill perfectly.  I don't actually sleep in pyjamas (I sleep Au natural, even in Winter), so it's not like I'm wearing the clothes I sleep in.

However, I gather people would assume I do sleep in my pyjamas and therefore if I wear them throughout the day, I'm wearing them 'round the the clock, which implies I don't shower, which also implies I'm a slob and therefore wouldn't do anything else constructive while wearing pyjamas (I'm thinking all this, I don't know this for sure, but it seems to be that people think you need to dress as if you're leaving the house to be a productive sort of person, is that right?).

As I always wear pyjamas at home (seriously within 10 minutes of getting home I'm in pyjamas), and as I do all my studying and writing at home, it is obvious (to me at least) that wearing pyjamas doesn't preclude you from being productive.

I'm wondering though, are we the only pyjama family?  Surely, that can't be.  Is wearing pyjamas throughout the day (if you're not leaving the house) that uncommon?  Or is it simply something people don't admit to because it carries a stigma?

Is your family a pyjama family?  Do you hide your pyjama family status from others?
at September 19, 2010
Email ThisBlogThis!Share to TwitterShare to FacebookShare to Pinterest
Labels: Family life

Actually, not really-but that's because much of the time I don't actually bother with PJs at all. Often we just go to bed wearing t shirts or singlets and undies, or worse *gasp* our clothes.(*insert horrified expressions here*) I've been making a conscious effort to try and remember to make us all wear PJs recently in order to be more "normal". ROFL.

But definitely, I need to get dressed and showered to feel productive, I think it's a mindset thing? In any case, I reckon wear whatever you're comfortable in!

Yup, we are PJ people. Well I am at least, its just soooo comfortable. And Ive scared many a courier / delivery person answering my door bra-less, lol