Clues in our bodies... 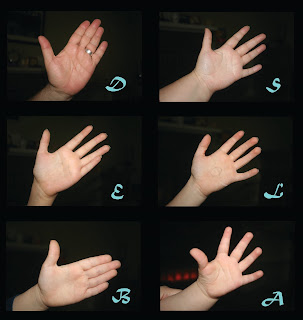 Somehow the comparison of the various hands in our household came up this morning.  Five of us were at home, and Luey was at school.  Erik and I realized our hands were the same length from the heel of our palms to the tips of our fingers.  His hand, however, was all finger length!  Dave remarked that he had piano playing hands, or artist hands (which is really quite perfect for someone who loves to draws), but also that they were very, very different from his own hands (Dave is a rather skilled artist in his own right, he just hasn't done any art in a couple of decades.  Dave would, however, differentiate his learned skills from Erik's natural ability.).

On comparison, we also realized Erik's hands really weren't shaped like my hands either (and I don't have an artist gene when it comes to drawing or painting or pottery and so on - I'm a writer, and beyond typing, you don't need your hands for that).

We were compelled to then compare Erik's hand to Bryn's and Ari's, but of course, they have the hands of a preschooler and a baby, respectively, so their hands are still chubby and not well defined in shape - they still have a lot of growing to do.  All the same, Dave and I felt that Bryn's hand is similar to Dave's in shape, with it's even fingers from base to tip, but Ari's fingers taper like mine and Erik's, even though in reference to his palm they're not long like Erik's.  Luey wasn't around at the time, so I caught a snapshot of his hand when he got home from school, and it is really hard to say who he is similar to, he seems to be a blend of all kinds of hands.

I'd heard somewhere that the shape of your hand could act as a hint to the kind of profession you might be best suited to.  Unfortunately, I couldn't find any reference to anything other than palmistry or Chirognomy, neither of which were quite what I was looking for.

Then, tonight, Luey was mucking around at the end of our dining room table, and it struck me that his posture and the length of his arms would make him an amazing dancer to watch!  Not to mention that he is double jointed, which he feels is an added entertainment factor - much to my horror!  The thing is, Luey WANTS to dance.  He is desperate for us to get him into hip-hop classes (I have no idea where to find such classes in our local area!).

I snapped of a few happy snaps of him dancing around our living room, and it is as if he body is built for dance.

Do our genes pre-determine what occupations we will be drawn to?  Are our bodies built to suit particular ways of interacting with the world, and without realizing it, are we drawn to those kinds of pursuits, even though we might feel that we made some sort of intellectual decision to follow one path or another?

There are a lot of artistic, musical, and theatrical people in my family.  Are we this way because it's what we grow up with and know and learn to love, or is it in our blood, our genes and the very design of our bodies?

What do you think?
at September 01, 2010
Email ThisBlogThis!Share to TwitterShare to FacebookShare to Pinterest
Labels: Family, Thinking

I don't know, but Luey looks every bit the dancer in those pics! Do your kids get hip hop dancing at school? Ours have just finished. Definitely not Liams thing but Sienna loved it. Donna's older boy J does Hip Hop dancing, they aren't far from you- I can ask where if you like?

Sif, Healthways offers Hip Hop classes, though I know this isn't as around the corner from you as it used to be.

Also, the dance studio on Station St near your old house would do them. Often local YMCA type places run them too, so maybe that one on Canterbury road near you. Can't remember what that place is called.

No idea about the hands but wow... L's posture in that first photo... people do YEARS of ballet training to get arms and posture like that!!!!

Oh hai! LOL, so used to not getting comments on here now, I just didn't check back!

Jayne, no dancing at school (which really, considering our schools so-called focus, is just appalling!).

Jen, the place on Station street was offering hip-hop about 18 months ago, which was actually unusual for them. Normally they just offer adult dance classes. I should ring them and ask if they are thinking of offering hip-hop again. Don't know how popular it was.

Kate, yes!!! I know, he reminds me of my brother at the same age - he did ballet for a year or two before dad pulled him out. Apparently, Mike's teacher thought he was a natural (he later taught himself break-dancing and was amazing at the, these days you'd never guess it though, LOL).