This is my fourth attempt at writing a blog post in the past two days.
Yesterday's two attempts were aborted because I felt too much shame about my state of mind.
Today's earlier attempt was very angry about the shame I'd felt about the first two attempts and how it's so unfair that people can't say they're struggling because no-one really wants to hear it, and the latest trick for shutting someone down when they're feeling crap about their life is to point out how much worse other people have it, and how lucky they are to have it as good as they do, even though they happen to be wondering if life really is worth struggling through.
There is no real effort to meet people where they are.  Either you pretend everything is fine - as per a blog link I received on Twitter yesterday (which has also been making the rounds on Facebook.  If you don't know what I'm talking about, look here)...  Or you admit your life feels like it sucks and then you prepare yourself for the onslaught of, "It's not that bad!", "Don't be so pathetic, you're life is really good compared to people in the third world/Miranda down the street/Me"...
Believe me, I know I'm lucky to live in Australia where there is a social security system, and I'm lucky not to be homeless.  I'm lucky to have a fabulous Mother-in-law who helps us out when we can't quite make ends meet.  I'm lucky to be extensively educated, to have access to free public health, to have both my parents alive, and children who aren't reliant on round-the-clock care just to survive.  I know all this.
I also know things are really tough at the moment, and I'm really stressed by how tough - and mostly uncertain - things are.  I feel I should be able to put those struggles into words and find support for my stress induced insomnia (three weeks running, except last night when I managed 6 hours sleep - mostly due to exhaustion - tonight I'm back at hotel insomnia, hence the 1am blog post).
So, today was a really rough day.
This morning I was filled with so much rage at the injustice of it all, that I could barely interact with my family.
The same questions kept swirling around in my head;
Eventually, I let all the rage just overcome me and I posted on Twitter the following statement...

Ok Universe, this is my final warning!  Straighten the hell up and fly right or I'll become REALLY scary.  kthxbai

A couple of my friends have a little joke between themselves about Twitter voodoo, wherein, if they ask a question or make a statement on Twitter and end it with "kthxbai", the magic of Twitter will make things happen the way these friends want them to.

Anyway, after posting that statement, I started on my third attempt of writing this blog post, and got a few paragraphs into it when the phone rang.  I answered it and there was silence at the other end, and I thought it was going to be from a call centre and was preparing to hang up, when suddenly I heard my name in a familiar voice that I couldn't place.

The caller turned out to be a friend of mine from many years ago, who moved interstate and, who I hadn't spoken to in at least two years. I'd sent this friend an email about two or three months ago, but hadn't heard back, so I thought we'd actually lost contact.  Luckily, when Dave and the kids and I moved earlier this year, we were able to keep our phone number, so she still had our number. 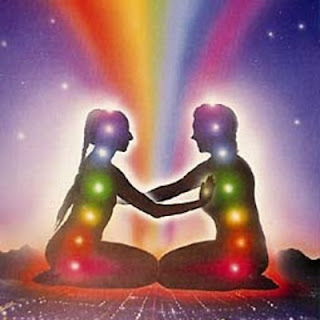 This friend and I are like spiritual soul mates.  We understand life and the Universe in very much the same way.  So, when we spoke it was as if no time had passed at all.  She's been through rough times, the same as me, in fact, we've led fairly parallel lives for the past couple of years and had many of the same challenges, so it was so good to talk to someone who really understood.  Not only that, she'd rung to tell me about an acquaintance of hers who has recently moved to Melbourne, and who she thought I might like to meet, who could help me with a few of the things I've been struggling with.

She also reminded me (without saying it) that I've neglected my spiritual journey.  The practices, in particular, which have always nourished my natural optimism.  She gave me some tips for getting back into practice and as always was a source of inspiration to me in this part of my life.  She didn't solve my problems and she DIDN'T tell my I was my own worst problem.  She listened, she acknowledged, and she supported without judging or comparing my life to hers.  Most of all she gave me hope that things will be better soon and there are things I can do right now to feel better and more at peace and an active participant in my journey, rather than just being swept along by all that life is throwing at me at the moment.

It is not that I don't have good friends who are supportive, I can think of one friend, in particular, who always lifts my mood by laughing with me, it's more that in this moment of utter desperation I cried out for some sort of sign about what to do, and this friend who I thought was part of my past now popped out of the ether and offered exactly the sort of help I needed to get me back onto solid ground.  Suddenly, I felt like perhaps the Universe is listening and there is a bigger picture that I'd lost sight of and I can trust that things will be okay.

Anyway, it was enough to cause me to abandon my previous blog post and write this one with renewed hope, even though my situation hasn't change at all, just yet...
at September 30, 2010
Email ThisBlogThis!Share to TwitterShare to FacebookShare to Pinterest
Labels: metaphysical, Philosopy, Thinking