Made in Dagenham - in the days before "click" activism... 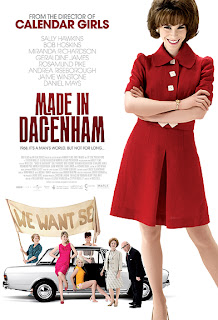 Tonight I went to a preview of the movie, "Made in Dagenham" and came away with an uneasy sense of how a comfortable living can make even the most fervent feminists complacent.


I'm known around the traps at the "feminist hater", which I personally find hilarious because anyone who knows me knows that I believe women are equal to men, not "should be", or "have to keep fighting to be viewed as" but actually, RIGHT NOW equal to men.  I simply believe that women need to claim that understanding for themselves.

There is a FANTASTIC scene in this movie that illustrates my point exactly.  The main protagonist, a tiny, mousey woman named Rita O'Grady, finds herself thrust into the leadership role of a group of women machinists for the Ford Car Manufacturing plant in Dagenham.  To everyone's surprise, not least her own, she discovers a fierce inner voice and fighting force that leads these women into strike action, drawing ire from almost everyone around them.  In one scene her own husband is all but pleading her to stop her fight, and in his monologue he points out to her that he doesn't go down the pub and drink all their money away, or cheat on her, or beat her and their children,. In other words, he does better by her than so many men in their community do by their wives.

Instead of being grateful that he is such a good husband and father, she vehemently retorts that living without abuse is her RIGHT, not a privilege bestowed upon her by a benevolent husband. 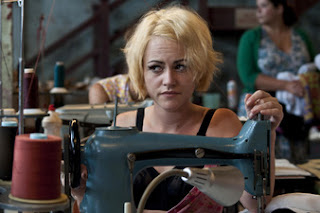 I love that part of this movie.  In our modern Western society where women own property and vote and express their sexuality, I often hear talk of how privileged we are to have these rights when so many women around the world do not have those rights awarded to them.  "Made in Dagenham" is a stark reminder that rights should not be awarded, they exist before they are acknowledged.  They need only be acknowledged, and that acknowledgment is not a privilege.

The women of Dagenham, who are briefly featured in person in the closing credits, were just regular, not highly educated women, who were not concerned with how words were spelled to entrench the patriarchy or whether or not shaving their legs signified male oppression.  They wanted fair acknowledgement for the work they did, they work they had to do to put food in their children's bellies.  While the comfortable middle-classes organise petitions and use fancy words to dance predatory circles around one another, these women put their jobs on the line for acknowledgement. 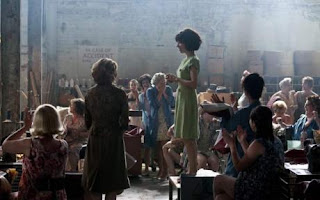 Seriously, I cannot recommend this movie enough, it's uplifting, funny and at times very sad as well.  I LOVED seeing Bob Hoskins on screen again, too, playing Albert Passingham, a very sympathetic supporter and strategic counsellor to Rita O'Grady because he's witnessed his own single mother work to support him and his brothers working side by side with men for less than half their wage.

Only people with everything to lose are willing to risk everything for a slim chance of winning and the women of Dagenham reeled in a winner for women around the world!
at October 11, 2010
Email ThisBlogThis!Share to TwitterShare to FacebookShare to Pinterest
Labels: events