I think I can say I've officially turned my days inside out.  I was up all night last night (Saturday night) and got to bed at about 4pm.  I then slept until 1am, got up and it's now 5.29am.  I'm wide awake, of course, and feel fine. It's nice to up during the night when everyone else is asleep because I get that space to think.

Sadly, my thinking isn't terribly ordered.  This is not so much a problem stemming from being up at an unnatural hour, but rather the status of being me.

As I've mention many times in the past, I have Attention Deficit Disorder, and my thought processes, if they were able to be taken out of my mind and examined would be seen as folllows:

Ok, the thing is, these thoughts aren't one following the other - it's not just a case of jumping from one disjointed thought to another.  These four streams of thought are running simultaneously.  My mind is doing this all the time, every waking moment - at least.  Right now, I'm writing this blog and still thinking about the meeting on Monday, the manuscript, and the vet show on TV in the other room.
So, really, it's no wonder I can't think straight or focus on just getting this manuscript finished and writing the exegesis (dissertation)...
And on that...
I really thought I was getting close to finishing.  I'd done all the edits my main supervisor sent me a few weeks ago, I just had a little rewriting of the first and last chapter to do and then I could start on the dissertation.  Until Wednesday, that was, when I received emails from both my supervisors pretty much telling my characters weren't as strong as they could be and the motivation of the plot itself was unclear.  Argh!  Why didn't they say this WEEKS ago?  Was it not a first impression?  Or maybe the second supervisor saw something the first hadn't and on discussion they agreed there were more problems than first seen?  Whatever the case it now feels like I'm running across thin ice on a 40 degree day, trying to reach land before I fall through the crust! 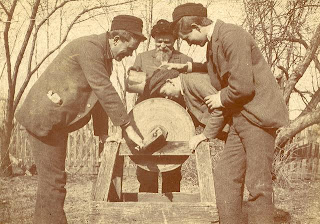 Oh well, I hear the grindstone spinning, must go press my nose against it again...  (anyone got bandages, my skin is raw already)
at October 10, 2010
Email ThisBlogThis!Share to TwitterShare to FacebookShare to Pinterest
Labels: study, Thinking, writing