Health Benefits of Singing and Dancing!

So, I went to the Simply Red concert last night and O M G - Amazing!!!

Marcia Hines started the night off. Other than the tragic green velour pants and tank top teamed with white, glittery belt - she was pretty amazing, too!  That woman can really sing!  Not a huge fan of the kind of music she chooses to sing, for the most part (though she belted out a pretty freaky Disco Inferno!), but got to give her kudos for voice and energy!!!  She's Australia's own regular Tina Turner! 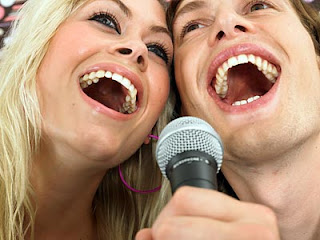 Was kind of disappointed that we had to sit through Marcia and the first half of Simply Red - that music was made to dance to!  It was weird, what's with sitting and watching music like that?  It's not exactly like listening to classical music, but everyone was so restrained, only a little bopping of a head here, or tapping of a foot there...

Finally, though, about half way through the Simply Red gig, a few brave souls got out of their seats and crept up towards the stage.  My concert companion and I watched with raised brows, waiting for Security to come and usher them back to their seats, but nothing happened, and soon, more and more people came jiggling down the isles towards the stage.  While we had AWESOME seats, just third row back on the isle, we soon found we didn't have quite as great a view of the stage as we'd had before.  The dancing looked like FUN, so we decided to join the crowd...

Getting down (and singing loudly because no one can hear you drop a note or six, anyway) to Simply Red, LIVE is better than Prozac for lifting your spirits!

This got me thinking. What are the benefits we gain from singing and dancing?  I vaguely remember that both singing and dancing release natural chemicals which make people feel good - so I asked Dr Google, and found the following links if anyone cares to check it out for themselves...

The Health Benefits of Singing

The Health Benefits of Dancing

It's not really surprising to note, considering how I've been feeling lately, that both singing and dancing (things I used to do ALL THE TIME) have not featured much in my life recently.

Going to the concert last night and singing, and dancing (like a maniac - I'm sure my companion was wondering what the hell she'd gotten herself into) with all the energy and gusto I could muster, was exhilarating!  It was honestly the best I'd felt in a very long time! So, I have resolved to increase the amount of dancing and singing in my life!  In order to make this happen, I am going to have to get my hands on a half-decent CD player at some stage.  I know there's the radio and also my computer, but I need some LOUD music, and I need it to be off my own choosing so I will just let it carry me away.  We don't have a stereo in this house, haven't had one since my old one died back in 2004!  So, might have to get one for Christmas (until then I'll have to make do with my dinky little inbuilt computer speakers).


Also, I'm going to investigate joining a choir.  Singing at home to the radio is all good and well, but there is NOTHING that compares to singing with a group of people and with purpose.  Luckily, I noticed our local arts centre has a choir, so I think I'll check that out.

Let me leave you with a taste of fun I had last night!

TURN IT RIGHT UP!

at October 09, 2010
Email ThisBlogThis!Share to TwitterShare to FacebookShare to Pinterest
Labels: Thinking

glad you had a good time. I love dancing with the kids, it is a feel good exercise. I like simply red too