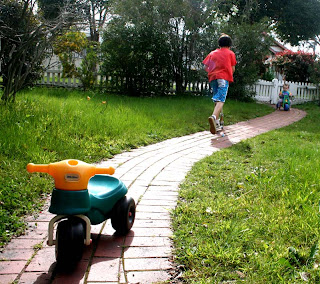 It might be global warming, or it might just be the Melbourne weather phenomenon.  Whatever the case, spring is here one moment and gone the next and people all around me seem to be suffering in line with the hide and seek game the sun has been playing for the past month or so.  Facebook is full of glorious highs on sun filled days, and equally dismal lows when the clouds gather in the heavens to block out the sun's warm light.

Today was a glorious spring day!  20 degrrees, sunshine and a light breeze.  Tomorrow is promising to produce a return to winter temperatures and rain.  The rollercoaster ride is set to continue for another week at least!  What can you do when the weather is so flightly?  Nothing really, just make the most of what sun and warmth there is. 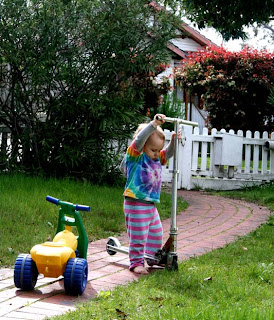 So, that is what we did today.  I let Ari out into the front yard after the boys got home from school (Luey headed straight off to a friend's house, as per usual) and he and Erik rode up and down the front path for a short while, before Erik took himself off to the park.  Ari was completely and utterly chuffed.  He even took some time to stand at the gate and watch the other school children pass by on their way home!  I think that will definitely be something to try again soon!

Sadly, Ari isn't all that used to being outside.  He'll be two soon and in all honesty, I can count on one hand the number of times he's been allowed to play in the yard.  Last summer he was extremely unsteady on his feet and I was afraid he'd tumble and come down on a sharp edge of a brick or the concrete steps in our back yard.  All winter it's been wet and cold and sodden outside, and so he's spent far too much time inside on level floors. 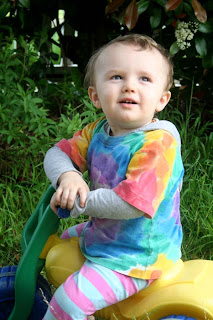 When we took him to the park a couple of weeks ago, his lack of experience was evident as he teetered across the tanbark.  He wasn't used to walking on uneven ground that gave as he stepped on it.  This is so different from when Erik and Luey were babies and outside crawling through the grass before their first birthdays!  I felt a bit embarrassed and even guilty over Ari's lack of experience!

Not only this, but just in the past week or two we thought he was developing separation anxiety because whenever he heard I was heading out, he's run and climb into his pram.  Then yesterday we realised he was also doing this if Erik and Luey were going out, and he was just as upset to see Dave and Bryn head off to kinder this morning. The poor child has been suffering CABIN FEVER! 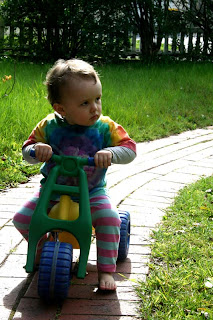 There's very little to be gained from sitting around feeling guilty though, and I've never been one to dwell on what I should have done back when I wasn't doing what it was.  Instead, I have to focus on what I can do now, and I'm looking forward to spending many sunny days like today out in the front and back yards with all my boys, in particular watching Ari become more confident navigating the bumpy, grassiness (with the odd pot hole - don't know what the previous occupants were doing out there!). 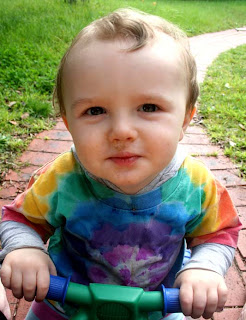 Today he had fun riding his ride ons and trying to figure out Luey's scooter (he hasn't seen Bryn's yet - might be time to get Bryn a bigger scooter so Ari can inherit his little three wheeler scooter) that Erik was also borrowing while Luey was at a friend's house (when the cat's away...).

Mind you, we do need to get the grass cut!  It's like a jungle out there!
at October 15, 2010
Email ThisBlogThis!Share to TwitterShare to FacebookShare to Pinterest
Labels: events, Family life, Thinking