Freud has much to answer for! 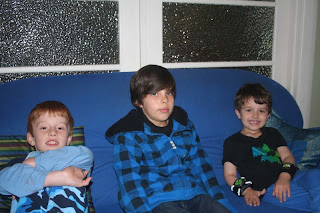 I was going to post this photo yesterday as part of a rant about how I've supposedly screwed my children's psyches up for life by breastfeeding each of them to the age of 4.5, or there abouts, when each of them decided to wean.

I ended up not posting that post because it seemed kind of fruitless in the face of overwhelming squeamishness in our society (mass media influenced Western society) regarding long term breastfeeding.

The truth is though, we (our society as described above) seems to have many, many ISSUES with our bodies, and our relationships with one another regarding our bodies and this is probably a much larger topic than can be covered in a mere blog post, but I wanted to put down some thoughts regarding this - in reference to parenting in particular.

If you look at the photo of my three older boys above, you'll see boys who just wouldn't stand out from the crowd as unusual in any way.  As a friend likes to put, we "pass for normal" in mixed company and honestly, I think my children are profoundly NORMAL.

Like most typical boys their age, they think jokes about bodily functions are incredibly funny.  They like top 40 music, and all the regular popular movies.  They play with Lego, read Captain Underpants, ride their rollerblades, scooters and bikes, and given half a chance would jump at the opportunity to have a Wii or a Playstation (but, unfortunately for them, they have mean parents).  They all have friends who they hang out with both inside and outside of kindergarten or school.  They're boisterous.  They can be very sweet and helpful one moment, and talk back and irritate one another the next.  They love mum and dad hugs, but not in public because, you know, they've got to be "cool" in front of their friends.  They're all outgoing and optimistic, except when they're shy or feeling a bit like the world is out to get them.  In short, they're NORMAL.

Despite all this supposed exposure to "sex", because the naked body automatically spells S E X in great big capital letters (according to much of society), they are normal.  They can look both my husband and myself in the eye.  They hug us freely.  They don't blush or run and hide when we talk about our bodies.

An anecdote from today...

Ari had just gotten up from his nap, and we were in the kitchen getting him a sandwich when Bryn comes in, climbs up on a kitchen chair and starts reminiscing about the time when Dad took him with Erik and Luey to drop them off at school, and Jennifer was visiting, and when he and dad got home, Ari was born.  Then he asks me, "Where did Ari come out on your body, mum?"

This description made me laugh, and run to my computer and post this all over Twitter and Facebook (coz, that's what I do)...  I was still laughing at it a few minutes later, and Erik and Luey wanted to know what was so funny, so I told them.  Then they laughed, and started pointing at each other and chanting, "You came out of a hairy hole!"  Then Luey decided I definitely shaved before I had him, which I told him I certainly did not!

At no point did any of them seem uncomfortable with the discussion of how they were born, and this is because they don't view our bodies as being exclusively sexual, not do they view sex as something dirty, or taboo, to be hidden (honestly, I don't think they think about sex much at all, just yet).

It seems that Freud, who, let's face it, had many, many issues regarding sex and sexuality has infected many of us with the fear that our children will be forever crippled psychologically if they catch even a glimpse of our naked body beyond the age of about 2 (after which most of us can recall very early memories), and therefore all natural practices such as breastfeeding beyond infancy, or discussing conception, pregnancy and birth of a child with the child, should all be avoided because it will lead to adults who can barely function in future relationships, or in society at large.

It seems to me it's the people who were brought up believing their bodies natural functions were unnatural or taboo who have grown up psychologically crippled.  Without our bodies, we could not reproduce, survive and thrive.  We should love our bodies, not loathe or fear them!  That's what I want my children to grow up believing...  Maybe that isn't normal, though - then I guess I reject this new definition of normal!
at November 14, 2010
Email ThisBlogThis!Share to TwitterShare to FacebookShare to Pinterest
Labels: Family life, philosophy, Thinking

I love this post!
My parents STILL walk around naked when I'm there and I am sure this has contributed to my zero care factor about other people seeing me naked.
DH is the opposite on both accounts.
Not a coincidence surely?