The stupidsticious side of Law of Attraction...

Some years ago there was a lot of hoopla about the release of "The Secret".  Oprah went and well and truly got her knicker in a knot over it and dedicated more than one of her shows to telling the entire world about The Secret...  Not much of a secret if the whole world knows, Oprah.  The truth be told, the whole idea of creating one's own reality through perception and practice never was a secret.  Not to anyone who thinks beyond what's for dinner, and does my bum look big in these jeans?

In case you managed to live under a rock during "The Secret" phenomenon (lucky you, it was hell out here!), it was basically a bunch of very entrepreneurial types selling "the secret to life long happiness and success" for the small fee of something like $125 for a book and a DVD (which immediately was pirated and circulated to all and sundry, but they still managed to make a mint from their clever idea).  I mean, you don't have to be Einstein to know that hope sells.  Hope sells better than sex!

This is NOT a secret!

Law of Attraction is basically the catch phrase for attracting what you focus on into your life.  I've lived my life by this "law" for the past 20 years (so, apparently, that makes me one of the "exclusive few" who were in on The Secret before someone wrote a book about it - still waiting for my cut of the proceeds, here...  Hello?).  You decide on your goal, you focus on your outcome and then you take the opportunities that present themselves for that outcome to be reached.  The thing is, you don't just sit back and think, "I want to win the lotto", if you want to win the lotto, you have to play, and I'd say you probably have to play as often as you can - which means sinking a fair chunk of money into your goal of winning the lotto.  If, on the other hand, you want to be financially well off, you'd better forget the lotto and start using your money a bit more wisely...  Know what you want, and make the most of every opportunity to see your dream realised.

Some people believe you think it and without doing anything to make it happen, the molecules shift in the universe and it happens.  This is more metaphysical, and I won't dispute it simply because it has been proven that you can change the shape of a water crystal merely by thinking about it...

But the dark side of thinking things into reality keeps me awake at night!  Really it does!  I have a stupidstition...  I believe that if you can make things come true simply by thinking or saying them, then that must also be true for lies...

Now this doesn't deter me from lying. 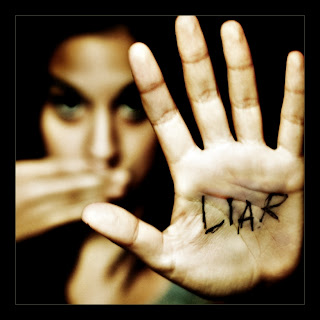 But it does make me think twice about the content of my lying!  I've had some terrible lies come true!  Like I lied once about having my wallet stolen with a heap of cash in it (I'd spent the cash on something I didn't want to admit to and didn't have the money I needed to pay something I was responsible for).  Then a few years later I had my wallet stolen with a huge wad of cash in it!  Another time, I lied about not being able to get an assignment done because my mum was sick in hospital and - you guessed it - not long after I got a call from her, in hospital!  That's not all, but you get the gist, right?

So, I've never lied about someone dying, because, well, you know...

The thing is, sometimes I lie about stuff that I just shouldn't lie about, especially given that I firmly believe that my lies can become realities, too!

I've lied about my kids being sick, so I didn't have to go to some awful gathering that I just didn't want to go to!

I don't want my kids to get sick, and of course, kids get sick all the time, but I'm obviously willing to risk it just to get out of a tedious social engagement!  I mean, what's a cold right, or a bit of a tummy bug - but then again, what kind of evil, demented mother all but WISHES her child to feel crap because she doesn't want to be bored...

The process of figuring out a lie that sounds reasonable, relevant AND that I can live with possibly coming true when the molecules my lie disperses finally settle into their rightful home, is sometimes more taxing than just facing up the situation I don't want to face up to, so in one way the stupidstition about LOA lying has curbed my lying to a certain extent, so that's good, right?

Do you lie with gay abandon, or do you bargain with the Universe about what you're willing to allow happen so you can avoid the painful truth?

ps - don't tell me you don't lie, anyone who lies on my blog will immediately be besieged with bad luck until they come clean!
at November 10, 2010
Email ThisBlogThis!Share to TwitterShare to FacebookShare to Pinterest