The lesson of letting go...

At the end of last year, I was doing some fossicking around on the net for forecasts for 2010, you know, horoscopes.  I'm not a big believer in general horoscopes; the simplistic mass media generated kind, but on the more astrologically sound sites I was checking out the forecasts kept repeating the same theme over and over, and it wasn't one I liked much.

Basically, it said that for me, 2010 would be a year of waiting, of overcoming obstacles and delays.

Those of you who know me personally, know that I completely missed out on the patience gene.  I'm not entirely sure there is a patience gene on either side of my family anyway, but if there was, it wasn't transferred to me.  I did get a double dose of drive though.  So much so, that I've often heard myself described as a bulldozer.  That is not a particularly flattering description but even I have to admit it's fairly apt.

In many ways, this drive I have to get things done has served me well.  I have not had a life without challenges and so, I've been grateful for my "just keep going" impulse.  It's extremely strong, this impulse.

I doubt that without this impulse I'd have the things in my life that I cherish so much, my husband and my children, and my various degrees.  So, as you can see, I don't want to deny my impulse to push through obstacles because it's served me very well up to now...

Well, these last two years have been nothing short of harrowing.  Quite frankly (and I don't want to be a drama queen, but let's speak plainly here) there have been times in the not to distant past where I have wondered if I can really keep doing all of this.  Dark hours in the middle of the night when I've wondered if it wouldn't be easier to just put an end to all my misery.

The thing is, my children wouldn't survive that event.  Neither would Dave.  So, I have to find another way.

I've fought the obstacles, I've pushed and strained against the overwhelming tide of challenges that seems have relentlessly washed over us these past couple of years and I'm tired, so, so tired.  Tired, lonely and really not very well in body or mind.

Last night, after a lovely dinner out with friends that involved lots of laughter, I came home and collapsed into a pit of despair - for all my struggling and worrying or resisting, 2010 is nearly over and not much has changed from this time last year.  Different house, but same situation - we're going to have to move and Dave doesn't have a job or a licence yet.  I haven't finished my degree and I don't have work either (and don't want to work because I don't want to be apart from Ari who I think needs this stability in the stormy seas that are our life at the moment).  2010 has, indeed, despite my very best efforts, been a year of delays and waiting.  And I'm still waiting.

That really only leaves one option.  That option came to me last night.  It doesn't thrill me because it goes against everything that I am, really.

I have to let go.

I have to let be what will be and stop fight and pushing and struggling and worrying.

I have to stop feeling responsible for everything and everyone.

I actually have to stop being so arrogant that I believe I am the agent for change. 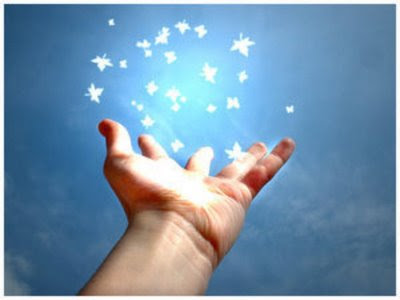 This has been an extremely tough lesson for me to learn and right now I'm not sure I've grasped it completely, it's more like I've intuited the answer without understanding the mechanism, but I'm going to practice letting go this week, just doing what I can in the moment and not thinking about what the consequences of everything may or may not be.

It's a matter of trust.  Trusting that things will work out, somehow.
at December 04, 2010
Email ThisBlogThis!Share to TwitterShare to FacebookShare to Pinterest
Labels: metaphysics, Thinking

Really sorry you had a dark moment last night :( and in fact that the whole year has been rather crap. But reading this really reminds me of what Buddhists say about attachment and how letting go can be a really positive life altering experience. I need to take this on board too. *hugs*

Thanks for the hugs. Letting go is not something that comes naturally to me. I'm a fighter and as fighters are wont to do, I tend to flog dead horses... A day at a time. Sometimes a moment at a time, hey?