Taking a moment to breathe on Christmas Eve...

It's 2pm Christmas Eve and in about an hour's time, I have to get started on Christmas dinner.  Being Scandinavian, we celebrate Christmas today.  We ring Christmas in at 6pm, and sit down to eat.  Later it's time for presents, and in this household, that is always followed by watching Carols by Candlelight.  Most years it's just Dave and the boys and myself on this day (and then we get together with Dave's mum on Christmas day), but this year my brother Michael will be join us. 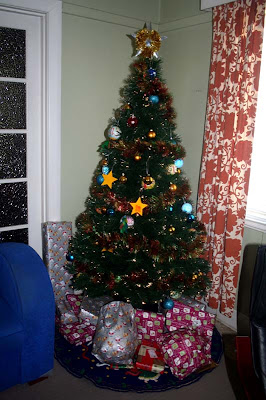 So, right now, the tree is decorated and twinkling with lights, the presents are arranged under the tree, and the boys are playing (or fighting, depending on the moment) in the sunshine filled front yard, and I have just a few moments of peace to apologise for not having updated here in over a week.

The week following my birthday was complete crazy with stress inducing situations.  There was kinder duty, and Bryn's finishing kinder, the boys finishing school - interlaced with dramas resulting from they having trespassed on school property the weekend before - and of course, as ever, my thesis.

Yet again, I experienced a 27 hour day of working solidly on the exegesis and manuscript.  Mum and I were on the telephone almost constantly throughout that time as she read through the exegesis with me as a second pair of eyes to pick up the ever present "typos" - I've discovered I have some for of dyslexia whereby I think one word but type another, sometimes completely different, word.  I had already been aware of my tendency to drop affixes from words (writing could where I meant to write couldn't, or cat where I meant to write cats), but this practice of writing and where I meant to write an, or intimate where I meant to write initiate is a bit of a worry because it leaves the impression that I just don't understand the meaning of words!

Anyway, after many, many wakeful, strung out hours, days, weeks and months, I FINALLY sent my thesis files to mum via dropbox and she saw to it that they were printed and bound and signed off on.  On Monday the thesis was mailed out to my examiners, who hopefully have it in their hot little hands right now (though I doubt they'll even look at it until after the New Year.  As they have eight weeks to mark the thesis, I could very likely miss the mid-February cut off for submitting finals marks in order to attend the graduation next April.  I'm a bit sad about that because it feels like there won't really be any celebration of completing the degree without the ceremony, and even though I can attend the following year, the time lapsed will be so much that it won't feel like a celebration so much as just another ceremony.  If I'm very, very lucky, they examiners might decide to sit down in January and mark the thesis and get the marks in before the cut off, that would be marvellous, but I can't count on it happening. 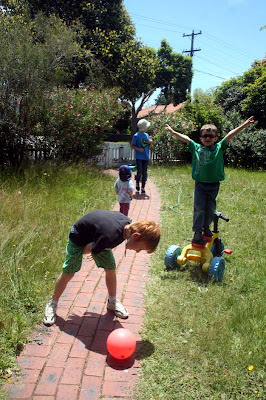 I'm very keen to hear what the examiners have to say, at any rate, regarding the manuscript.  I'm hoping for some constructive criticism so I can move onto the next step of trying to get it published, which will be to go in search of an agent, probably via the Writer's Centre here in Melbourne.  There is also a competition I've heard of for submitting unpublished manuscripts, which I'm very interested in enter it into.

In the meantime, I am determined to read more, both fiction and books on the craft of writing.  I feel I have been extremely remiss in this aspect of my preparation and I want to right that wrong.  If this Masters has taught me anything, it is the importance of reading and research!

So, now we are all on holidays.  Next weekend we'll start our summer games tournament.  In a few short weeks Bryn will start school, and a handful of weeks after that we will move house yet again.  So, for the next month or so I want to focus on strengthening our family connections and reading, reading, reading!