I had a headache for most of January 1st - not a hangover headache like a number of friends I read about - I think it was from a combination of fatigue, too much short distance focusing of my eyes (i.e. too much time on the computer, iPhone or with my nose in a book), and a lack of coffee.  So, going to bed at 10.30pm last night seemed like a great idea at the time.

Unfortunately, I woke at 2am, still with my headache, and unable to sleep.

My mind is always a turmoil of thoughts in the dark hours, and mostly they consist of a narrow range of anxieties about mine and Dave's and the children's immediate or intermediate future.  Tonight, they're much more scattered and disjointed, and I feel the need to get them down to release them.  So, bare with me - or not, you might just want to skip this ramble and come back for the next post - as I let the thoughts tumble as they will, here.

My main pre-occupation, as it has been for a fortnight now, is with a friend who has suffered a terrible loss.  The worst loss possible for a mother.  It wasn't long ago that we were excitedly anticipating the arrival of her fourth child, and now that excitement has turn to immeasurable pain and grief.  I have felt so much pain for her over the past fortnight, but impotent to reach out for fear of overstepping, so only able to send love from afar in the vain hope of easing her pain.  It is so wrong.  Babies shouldn't die.  No one should die in December, when everyone is supposed to be happy.  It is just so very wrong.  I feel sad and angry and guilty and grateful all at once and none of these feelings can ease her pain because how I feel is irrelevant, but I just have to get it out because I feel like I've been holding it in for so long.  I'm so very, very sorry.

When I'm not connecting with the pain that lurks around the edges of every day - because my thoughts are never far from this friend - I'm happy.  Life is pretty good at the moment.  I'm really loving having the boys on holiday, even though it can get noisy and crowded and there can be a lot of bickering when people start to feel a bit cabin feverish.  This morning we discovered we'd managed to win 5th division lotto!  That amounts to $26 and something cents, hardly a fortune, but fortuitous for us because we haven't won anything on lotto in past two years of struggling.  So, on the first day of the year, I also felt the golden rays of good luck feeling their way across our lives, and it felt good!

Another couple of people made comments regarding their parenting choices today, and I immediately started composing blog posts in my head about how such attitudes towards parenting are erroneous - I laugh to myself even as I write this because Lord knows I'm no poster-mum for perfect parenting!  I can see now how my judgments have caused a poisonous decay in my spirit!  So, I want to say here and now, I release this need to judge others, I have no more need for it!

On the topic of New Years Resolutions, Jayne posted a blog post about her New Years Choices over at Random Ramblings of an Unhinged Mind, and I really liked that she called them choices.  My choice to drink green tea has revealed a pleasant surprise!  I bought green tea with mint, and I really like it!  I like it so much, that both my hot drinks yesterday were green tea, by choice!  I didn't drink any coffee by choice!  And it was an easy choice to make because I just love the green tea with mint so much!  In fact, I have a tea beside me right now!  Luckily, green tea contains caffeine, so my caffeine withdrawal - while still there - is not as prominent as it would have been if I was drinking some other herbal variety.

I think if I had one New Years Resolution for 2011 it would be to focus on living life just one day at time this year.  Just live today and limit thoughts about tomorrow, or next week or next month or six months from now. Just focus on doing the very best I can today! 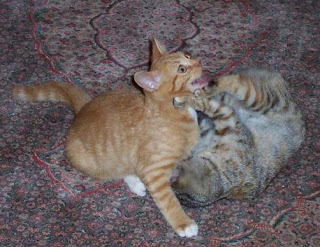 I'm encouraged that on the very first day of the year, I spent a fair amount of time thinking about my next writing project.  Before I completed the requirements for my Masters, I was a bit concerned that I might finish Hidden and then never write again.  However, over the past week, the thoughts of my next project have been creeping into my mind, and today they spent a some time jostling about in my cranium like a tumble of kittens wrestling on the floor.

I have two stories competing for my attentions.  One is the prequel to Hidden, Lily's mother's story.  She doesn't have a name yet, but a couple have occurred to me.  I know, in very broad strokes, what happens to her, so it wouldn't take a lot of effort to fill in the details.  The other story is of Nina, my pregnant woman who is caught in a tug-o-war regarding her birth choices.  This story has been with me for about three years now, but it won't be an easy story to tell - even though it ends well for her - because it contains a lot of sadness, a lot of subplots about pain and loss and trauma.  I fear that I will make someone angry, very possibly make nearly everyone angry because one woman's story can never be representative of all women, or even any woman, because every pregnancy, labour and birth is so different, so private, and yet such an arena of public dispute!

I think I will write both, at the same time, and see which one bows out along the way, because both stories really want to be written and I can't choose between my babies.

Speaking of babies, it's 4.10am, and my eldest is up.  He has a stomach ache and can't sleep.  His sleep has been completely out of sorts for the past 24 hours, so not sure what's going on there.  He says he's not worried about anything...  Hmmm.
at January 02, 2011
Email ThisBlogThis!Share to TwitterShare to FacebookShare to Pinterest
Labels: metaphysical, philosphy, thoughts, writing

I wish I could have remembered my own mantra today. It was in my head after watching a movie. I was thinking how I need to be gentler (in voice and tone) to the kids especially M who I butt heads with. I just want so badly to keep her close as I worry she'll jumping fences in adoloscence ...