Do we know too much? 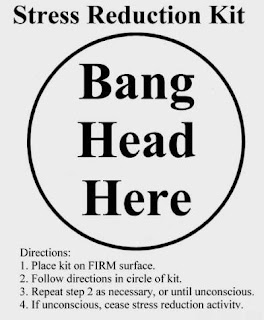 2011 is my year for reducing stress.  The last two years have been stressful, but 2010 was particularly so because things I thought we would have sorted in 2009 were still hanging over our heads, I was trying to finish my thesis, and generally speaking, our resources had already been stretched to capacity.

Many of my friends commented on a great change in my demeanour last year, and while I was well and truly aware of this myself, I felt quite powerless to affect personal change.  I simply had no resources or capacity to stretch any further and be the understanding, compassionate, and reasonable person we all expect everyone around us to be under normal circumstances.

Several times last year I was nigh on complete mental and emotional collapse, but without the ability to communicate this effectively to anyone.

In the past couple of weeks I have wondered about the part information plays in creating stress.  For several decades now, we've been living in the "Information Age" and most everyone I know believes that is a most wonderous thing.  We are told information is power.  Is it?

How much information is power, and how much leads to disempowerment?

News coverage didn't help many of the people in rural Queensland at all.

Yes, watching television and listening to the news might have helped some people prepare, but then again, looking out your own window would probably be just as informative.

In the Victorian fires two years ago, news coverage did not prevent many people from choosing to stay with their homes and perishing as a result.

But rather than arguing the immediate benefit or not of news coverage, I was to talk about the emotional impact of information.

I'm seeing negative fall-out, not only in my own home, but generally in society.

I remember on the morning of September 11, 2001, waking up to the beginning of what would be two weeks of continuous, all-but-unilateral news coverage of the planes flying into the Twin Towers in New York.  At the time Luey was 11 weeks old, and had been on medication for severe reflux for about 6 weeks.  I was suffering badly from post-natal depression and the repeated footage of death and destruction 24 hours a day for two weeks running had me wondering - seriously - what kind of selfish monster I was to bring a child into this world for him to suffer from reflux and colic, and his big brother to suffer from the emotional neglect that was a result of my depression and then for them to probably die in early childhood because humanity is so horribly vile.  I did think about ending all our misery. - and that is something I've never admitted to anyone before this moment.

During this past month, I've felt helpless and hopeless at times.  I want to be content.  I want to be carefree, but how can I be happy when so many people are suffering.  I was watching Insight a couple of nights ago, and the audience were flood survivors from Queensland, most of whom were not covered by insurance, and I wanted to cry.

It's not only natural and man-made disaster that evoke this response though.

My husband and I choose not to vaccinate.  The other night, on The Drum, I heard parents like us being described as Medical fearing alternative radicals.  I could laugh at this description because in this household we aren't particularly alternative at all when it comes to trusting the medical institutions.  We give our children panadol all the time, we ring nurse on call for tummy aches, we go to the ED for twisted ankles, I opted to have my gall bladder out BEFORE considering any alternative routes, I had cosmetic surgery to straighten my lazy eye even though it didn't impact my sight at all, we medicated our refluxy child with Zantac from 5 weeks of age!  We simply choose not to vaccinate, that is really the ONLY way we are alternative...  Oh, wait, I did have that one homebirth...

Dietary choices is another one...

What's good for you to eat?  What about your child?  If you look at all the information out there, you'll find NOTHING is good for you or your child.  NOTHING.  Everything is eventually going to harm you, even if you eat it in moderation, even if you just eat it occassionally!

The environment is also not good for you.  There are no organic, clean, non-toxic materials left on this planet.

It's not safe for you baby to sleep in a cot, especially on one of those new, fumey mattresses, but don't even consider co-sleeping because that's definitely not safe either!

Don't get bunks for you children, in case they fall out, or hang themselves WHILE they are falling out, but don't put a mattress on the floor either because all that dust you can't get up, even with the best of the best vacuum cleaners will give them asthma...

Then again, EVERYTHING gives them asthma - EVERYTHING is potentially an allergen, but don't worry too much about that because being YOUR child has probably doomed them to asthma anyway because it's hereditary.

Obesity is also hereditary, so forget about the diet yogurts, and diet soft drinks, they're not doing any good, anyway...  And they're full of sorbitol which is carcinogenic...  But even if you don't give them products containing sorbitol, then aspartame will do the same job, and so will passive smoking, which you can't control anyway...

But if you can't give them sorbitol or aspartame, what can you do?  Sugar is known to deplete calcium, and you don't want them to end up with osteoporosis, which in on the rise for women AND men these days, and stevia is banned in the US, and agave is almost 100% fructose, which is simply so bad for you, even if it is 100% organic (remember, NOTHING is really organic anymore)...

Maybe it's best to just keep the kids at home where you have a better chance of controlling their environment?  Then, of course, they will be socially stunted and grow up to hate you and probably procure a gun and go on a shooting spree.  At the very least, it's liable to scar them emotionally to be so bound to you and never to learn independence, but the alternative is to push them out of the nest at the age of five, and scar them emotionally by forcing them to be independent before they are ready. And schools are horrible places where children are constantly bullied - this is a researched fact, by the way - and some are hanged or stabbed by their peers, or sent vicious text messages and "rated" on web sites to the point where they feel they have no other option but to kill themselves.

Here's the BIG one though...  What is MOST likely to impact a child's mental health?  Their parent's mental health, of course!!!  Stressed parents lead to stressed children, who have greater risks of medical challenges later in life due to elevated cortisol levels in the brain.  This was proven in a study done of children who's mothers were pregnant at the time of 9/11 in New York.  The study found that maternal stress led to a significant rise in cortisol in infants who were inutero at the time of the attacks on the Twin Towers.

Is all this information actually helping us or creating so much stress in our lives that it is likely to shorten them?

Do we need to know everything, particularly things we have no power to effect real change?
at January 23, 2011
Email ThisBlogThis!Share to TwitterShare to FacebookShare to Pinterest
Labels: philosophy, Thinking

I honestly think we'd be better off not know in many cases. Add to that I'm an information junkie and just can't get enough. I can't cram it all into my head, or the time getting it into my day. There are certainly tidbits that have made my life remarkably better, but so much more is as burden.

A very good question. We do go overboard I think - but I must say I do want to know - but is it good for me??? Might need to steal the stress buster graphic!!