'I've decided I need to spend less time on the net, and more time living in the real world!' 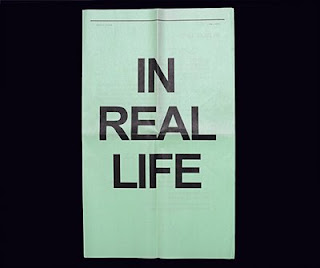 If, like me, you've been a user  of the internet for a long time, you will doubtlessly have heard some incarnation of the above quote - usually it's part of a message on an online forum, or on Facebook, or on Twitter (ironically!).

It always fills me with mixed feelings; irritation and guilt, peppered with a good old fashioned eye-roll, and just a little bit of 'Me too!'.  This last week though, I had a bit of a think about this whole idea of spending more time 'living in the real world', partly because I spent enough time (two whole days!) away from my computer and iPhone to warrant DMs from concerned friends (thank you concerned friends, I felt missed!), and partly because while I was out there 'living in the real world' I realised, I've never actually EVER 'lived in the real world'.

You see, the reason I was away from the computer was because I had my nose stuck in a couple of books (so, a world concocted by an author - this one inhabited by sparkly vampires - hardly 'real') during the minutes and hours I might otherwise have been sitting in front of my PC or fiddling with my phone.  I did a lot of other stuff, of course - housework, playing card games with the kids, talking to the Decrepit Husband, running errands, visiting with friends, and my all time favourite, SLEEPING (though, as usual, not during the dark house - because that's when I was making the most of the silence to read), but I do those things anyway, with my iPhone or PC within reach in case I get a free moment...

When I thought about it some more, I realised, I've NEVER actually 'lived in the real world' any more than I do now before I was seduced by the internet.  Before the internet, I would spend most of my free time with my nose in a book, or in my diary scribbling away, escaping into the world in my head.

Why is reading a book so much more a worthwhile expenditure of free time than reading blog or forums or Facebook?  I know there is a lot of talk about the short attention span one develops over time from reading discontinuous snippets of writing here and there, and only reading in short intervals, but seriously (as I just found out this week) if you actually try to read a novel in a house with four children and a DH, you'll find yourself hard pressed to read more than two paragraphs at a time between 'Mum, where are my runners?' and 'Mum, are you going to make a green smoothie soon?' and 'Mum, Simon told me the other day that in the third Harry Potter book, blah, blah, blah...', or 'What do you want for dinner tonight and are we doing anything on the 16th?'...  If I have a short concentration span (setting aside that I have ADD anyway) it's because, try as I might, I'm not ALLOWED to concentrate on anything for more than 4.3 minutes at a time in this household (they tell me it's part of my mum/wife contract).

But it did make me think about the other things I'm not doing - that I've never done - all this 'real world' stuff that I've obviously been missing out since I was about 4 and taught myself to read and write (I see all you Steiner-philea smiling smugly, by the way, I obviously lost my lust for 'real world living' because I learned to read and write too early!).  The thing is, if real world living is stuff such as making jam from scratch, or growing your own vegies, or being a people person doing their bit to keep the cafe culture of Melbourne alive, I'm afraid 'real world living' isn't for me.  I may have to content myself with 'fake world living'; spending time with my family and small group of friends and - when I can - catching some time alone in the every-day to pursue my love of reading widely (from forums, Facebook, and Twitter - where you'd actually be amazed by the stuff you can learn (not everyone is all me, me, me), and books).  Oh, and writing, of course (yet another solitary pursuit that probably doesn't rate as 'real world living').
at January 12, 2011
Email ThisBlogThis!Share to TwitterShare to FacebookShare to Pinterest
Labels: Thinking, writing