'Just make sure they get enough one on one time"...

As a mother of four, I've heard this advice more times than I care to recall.

I guess the first thing that pops into my head is that I'm really not the kind of mother who sits on the floor and plays with my children for any length of time.  Maybe this suggests to you that I'm self-centred, but let me reframe that image for you for just a second.

Throughout the millenia parents have never had the free time they have these days.  Having plenty of time to "engage" your children in "activities" is a relatively modern parenting experience.  Even for those families who were well enough off that they didn't personally have to farm their crops and livestock, or build their home and furniture, make their own clothes and wash them by hand, and so on, the idea of Mother and Father spending more than a few minutes with their precious children each day was mostly rare.  These people employed tutors and governesses to take on the role of hand-rearing children personally.

In modern society though, there is a lot of talk of 'enriched environments' and 'educational toys', not to forget good ol' 'quality time', and many parents quiver in their boots at the thought of being solely responsible for their child throughout the day because they imagine it means having some sort of schedule of activities to keep the small precious 'entertained and engaged'.  I personally believe this is why so many parents quit reproducing after 1 or 2 children! By the time their youngest is sent off to school (yes, I'm ignoring the 1% of parents who are 'brave enough' to homeschool because mostly this doesn't even apply to them), the parents are drained, or broke (thanks to exorbitant childcare fees to let someone else provide an 'enriched environment' for their child) or both!

Me, I do my own thing at home with my kids, I talk to them all day long, and there are lots of kisses and cuddles, but I don't ever actually PLAY with them, because, well quite frankly, I'm not a child and playing would be an inauthentic thing for me to do and they'd pick up on that inauthenticity (and my doubtless seething resentment) in a millisecond.  I do occassionally help them set up their own game (like an indoor cubby, or pulling out the heavy train-set box) but that's the extent of my personal involvement and after that it's up to them to, uh, 'entertain' themselves.

Getting back to the advice about ensuring I (or their father, preferably both) spend one-on-one time with each child...  I've always found this came very naturally, and having four children has just never impeded that for us.  It does help that both Dave and I are at home a lot, but even during those times when he has worked away from home, or I've attended studies away from home, one-on-one time just 'happens' without much thought.

First off, Erik had two years alone with Dave and myself before Luey was born.

After Luey was born, I would often have Luey for the day while Dave took Erik (sometimes to work with him, no less), and once Luey was over a year old, we swapped regularly.

Then Bryn arrived (the magical third child who apparently makes one-on-one time pretty much impossible according to many people), but when he was 15 months old, Erik and Luey started school, so then Bryn and I would cruise along just the two of us all day, and for a while there Dave was unemployed so Bryn had a choice about which parent to spend one-on-one time with!

When Bryn was three and bit, Ari came along, and with Erik and Luey still going to school, Dave and I went back to divvying up the remaining two quite often.

Bryn wanted to go to kinder, so then from the age of 1, Ari had either Dave or myself to himself for 11 hours a week, and in three weeks time when Bryn starts school, he'll have one-on-one time for some 25 hours a week! 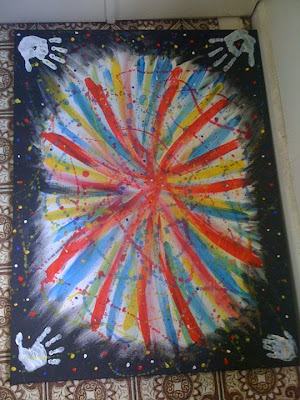 But of course, one-on-one time is necessary throughout all the developmental stages, not just in early childhood.  And STILL all my boys get this, be it by helping Dave and I do something around the house (they NEVER all want to help at once, surprisingly!), or by Dave or I taking one child with us on an outing, to the shops, or the library or a gathering.  But wait, there's MORE!  Believe it or not, we both often spend one-on-one time alone with each child, just talking about their stuff.  Like how today Dave and Bryn hung out in the bedroom talking about Bryn starting school while Bryn tried on his uniform.  Or how Erik and I spent one-on-one time this afternoon in the laundry while we worked on the finishing touches of a painting we'd done with the other boys earlier in the day (I needed a Pro to help me do some serious splatter painting!).

As you can see, it just happens naturally.  We don't have to plan it, or worry about it, so it often makes me smile when people tell me to make sure we find time for one-on-one time with each of our children!
at January 15, 2011
Email ThisBlogThis!Share to TwitterShare to FacebookShare to Pinterest
Labels: Family life, human development, Thinking

i just cannot do the sit and play barbies thing so feel some relief reading this. I agree there are ample opportunities for one on one time, even homeschooling with both at home but I also think that having two children who compete with each other quite a bit that having one on two time is more important for teaching them that they must share mama1