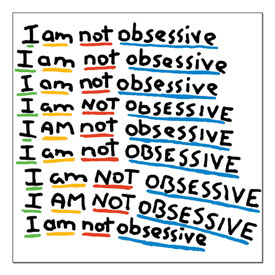 I think most people have some sort of obsessive-compulsive behaviour they can account for in their daily life, whether it's always putting your undies on before you top, or not being able to do anything until you've had a cup of coffee...

Some of us know we have more worrisome obsessive-compulsive behaviours, but still not troublesome enough to cause us to seek out professional help.

I have a lot of obsessive-compulsive tendencies.  I can relate to counting everything, and to *having to get to the next light post before the next car passes me or something bad will happen*, but I haven't sought out help for it.

I was a bit worried about Ari's need to tidy, but it's pretty much matched by his need to dump stuff out of his toy boxes, so I'm choosing to enjoy the fact that he can't STAND plates or cups on the coffee table and MUST remove them to the dining table as soon as he sees one...

But on a more serious note, today I've been thinking a lot about my obsessive-compulsive relationship with food.    I just can't seem to figure this one out.  First of all - most generally - I can't eat food at other people's houses unless I've seen exactly how it was cooked and stored.  Baked goods I'm better with, but not if they contain meat or cheese.  I have an irrational fear of not liking something I'm offered and feeling like I'll have to eat it anyway just so I don't upset the host.  I have a pathological fear of food poisoning!

More specifically, I have suffered from orthorexia to varying degrees throughout my entire adult life.  That is, I've become quite obsessive about the food I eat, often cutting out food groups or specific foods, and living in fear of consuming those foods.  Meanwhile, when I allow myself to eat what I want, I also become compulsive about that - often eating exactly the same thing day after day, week after week, even if I don't really want it.

I'm like this about potato chips.  If I eat a bag one evening, I HAVE to have another bag the next evening, and the next, and the next, and I won't crave them for the entire day, but as soon as the sun goes down I feel dispair if I don't have them.  Then I'll start eating them, but might not want the whole packet, but feel I have to eat the entire packet because the thought of a half-eaten packet lying around the house frightens me.  Oh, and I can't start on a half-eaten packet, it must always be a fresh one.  Stopping myself from eating a bag of chips every night takes an enormous amount of energy and concentration for three or four days straight before the spell breaks.

Do you see what I mean?

So, anyway, I've been thinking about all of this because I drew that card on NYE about not posioning my body any more.  I know what it is I have to aim for - a vegan diet, preferably raw - but I also know how miserable I make myself when I start thinking about the food that goes into my mouth.  A friend started a vegan challenge with a bunch of people on Facebook today, and I've been reading the posts, and feeling the obsession creep in.  I've been eating much better since Saturday, but I'm not eating organic, and I'm not buying all the extra stuff because we can't afford it.  In fact, our fridge is nearly empty today, and although tomorrow is payday, we'll have less than $50 to get by on until next Tuesday (when I can cash in a Govt voucher for Bryn starting school), and we have to feed 6 people from that...  We don't have money for me to buy lots of fresh fruit and veg when pasta and rice and mince is a helluva lot cheaper...  I might be able to manage the green smoothies, but that's about it.  So, I have to come to terms with the world not falling apart if I don't manage to do even as well as I have this week...  But it's hard because I do obsess.

I'm writing this out to give myself permission to be okay with the process.  To not lament not living up to a self-imposed standard that will leave me feeling like I failed.  To know it's okay to do what I can, at any point in time!  Maybe this is the real challenge?  Maybe being okay with eating what I can eat at any time is the obstacle I need to overcome?  Maybe if I can learn to *let go*, I'll also be able to make better choices in the long term.
at January 05, 2011
Email ThisBlogThis!Share to TwitterShare to FacebookShare to Pinterest
Labels: Thinking