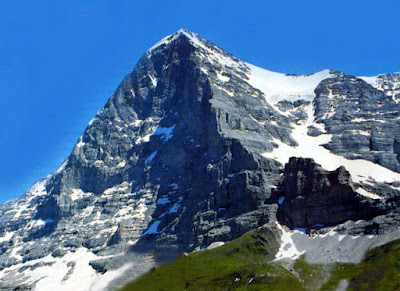 On Tuesday night I rewatched a documentary called "The Beckoning Silence", Starring Joe Simpson and recounting the fate of the second group of mountain climbers to attempt the ascension of the north face of the Eiger in the Swiss Alps.

I can completely and wholly relate to his words when he says (regarding his own near demise) that once he knew the way out he knew he just had to keep going until he got there.

This mode of thinking is wholly responsible for every difficult achievement I've managed in my life.and seeing a documentary such as this fills me with self-esteem.  If I am to be defeated by circumstance, let it be while I'm doing something I love, challenging myself to the best of my abilities!  The men who died knew there was a chance they might die, if there hadn't been a chance of this, they would have been doing something else.  They pushed their bodies but also their minds, their problems solving abilities, and their determination to the limit!

This is, perhaps, why I love labour so much!  It's intense, but there is no way out except through it, it's the ultimate form of challenge because you can't just give up.  In a marathon, you can stop running.  In most challenges you can just stop and nothing bad will happen, but in labour, like mountain climbing, you can't just stop, no matter how much you want to...

Parenting is similar - though sometimes the intensity wanes enough for you to get your breath.  I have often felt like not being the parent anymore, like walking away, but the thought is only momentary because I CAN'T, there is no walking away.  Okay, strictly speak, I could walk away and survive, and my children would probably survive, but our relationship wouldn't survive, it would never be the same.

Knowing I have stamina, and I'm not afraid of a challenge, is fantastic!

That said, I think it also explains why I constantly challenge my limits - which is not something I actually enjoy in the moment, so much - I think I'm hooked on the adrenalin rush that comes with conquering that mountain!
at January 06, 2011
Email ThisBlogThis!Share to TwitterShare to FacebookShare to Pinterest
Labels: Thinking