There was a young lady who lived in a shoe... 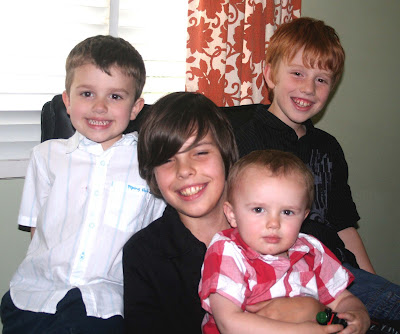 I've participated in parenting forums of one variety or another for over a decade - the earliest "forums" were internet lists which looked very different from the snazzy, easy-to-follow forum today's parents are used to - and one of the endless debates has been about small families versus large families and the benefits and drawbacks of each.

One of the arguments against large families that invariably pops up in these discussions (which sometimes turn into flaming debates - though less so these days, now that everyone has found their PC hats) is that of children in large families just not getting enough attention.

My mother has often told me a story of one time her family (consisting of seven children) moved house.  On the first night, they all found places to sleep in their new home, a couple in this room, a few on the floor in that room. Everything was sorted until a little voice said, "Where am I going to sleep?" The voice was that of my uncle Magnus, the middle child - you know what they say about middle children, always forgotten - who had not been allocated a place.  After looking around, it was decided the only place for him was on the dining room table - so there he slept!

Well, I've always scoffed at the idea that a mother can have so many children she loses track of them...  Until recently...

I think I mentioned a few weeks ago about Ari doing a bolt, unbeknown to me, thanks to discarded open back door, side gate, and front gate!  Yes, the terrible trifecta. All should have been shut and locked after use, but hadn't been. I was on my front porch with the mother of one of Luey's friends who was visting on a play date (the friend, not the mother, that sentence needs commas!).  We were shooting the breeze when three anxious ladies from the neighbourhood came down my overgrown, ride-on littered front path with Ari.  They asked if I was missing a child, and for a moment I was stunned, because actually I WASN'T missing a child.  I  hadn't known he was missing!  I had been in the house with my children, plus the guest child and as far as I knew all were present and accounted for!  At some point, Ari had toddled out the door on his chubby little legs, wandered around the side of the house, down the front path, and out the front gate - all the way along our block until he'd almost reached the VERY BUSY six lane road at the end.  Luckily neighbours - who I imagine only have one or two children to keep track of - were keeping an eye on the street and spotted him!

I was terribly embarrassed as I stood there with my "so many children she didn't know what to do" hoard gathering on the front porch to see what the excitement was...

Yesterday, I'd all but forgotten that incident when Jayne and I took our children to the park.  In all there were six children, five on scooters, and Houdini (as we now call him) in the pram.  As the big boys knew the way to the park, we let them ride ahead and wait for us at each corner so everyone could cross road together.  Erik, Luey and Liam were on two wheeler scooters, while Bryn and Sienna were on more cumbersome, slower, three wheeler scooters, and Jayne and I took up the rear with Houdini in the pram.

On the same road as the park, but across the street from it, the footpath is long and unbroken by side streets, so the big boys took off and were soon out of sight.  Bryn and Sienna tried to keep up as best they could, and we followed but soon lost sight of all of them.  We got to the park and saw the kids had crossed the (very quiet) street themselves.  All of the kids are well versed in crossing streets carefully so we didn't think much of it.  Once we got to the park bench though, Jayne couldn't see Sienna, and asked Liam where she was.  He thought she was with us.  Very quickly we all flew into action calling out for Sienna.  We looked all around the playground but didn't see her, so headed back to the road.  It was only then that Luey asked, "Where's Bryn?"

Honestly?  For a second I thought, "Bryn who?"

No, seriously, I had forgotten all about him!

I realised exactly what had happened in that same moment, of course, Erik, Luey and Liam had crossed the road and gone to the park, and Bryn and Sienna hadn't seen them and just kept going along the path until it stopped, when we got up to the road, they were on their way back.  They were fine, they kept cool heads, and Bryn never knew I hadn't even missed him - but I did...

This is, of course, a terrible reflection on my parenting skills, and I'm sure it'll be used by people of fewer children as an example of how a mother of many (and I only have four) can and does lose track, but that might be a bit unfair.  I suspect this is just me!  And here's why...

There was a time when I just had two children.  Erik and Luey.  One day, Dave took Erik out with him somewhere, I went shopping with Luey in the pram because he was a bit of a bolter as well.  I idly window shopped, and went into a handbag shop where I found a wallet I liked, paid for and then left the shop.  From there I went to Target for about 10 minutes, and then I headed to a cafe for a coffee, and it was only when I sat down that I realised I didn't have the stroller anymore - or it's occupant, Luey!

In a mad panic I ran back to Target and couldn't see the stroller anywhere, I tracked back my steps to the handbag shop and there the lovely young girl behind the counter greeted me, all smiles, and said she had my stroller behind the counter with a sleeping Luey, none-the-wiser, on board!

So, before you tell your friends about the blogger who had so many children she routinely forgot about one or the other of them, remember I've been doing this since I had only two!
at January 03, 2011
Email ThisBlogThis!Share to TwitterShare to FacebookShare to Pinterest
Labels: Attachment Parenting, Family life

I did it when I only had one :( Amber was about 2 weeks old and I drove my mum to the train station. Not only did I forget to take Amber with me, I didn't realise I'd forgotten until nearly a month later when I properly left the house for the first time (i.e. actually stopped the car and got out and went somewhere rather than just a 7 minute round trip dropping mum at the station). I only realised because I had to install the baby capsule in the car to take her with me, and that got me wondering: what had I done when I took mum to the station?

hahha, I remember backing out of the drive way and as I turned to look I had a niggly feeling I had forgotten something. Kept going and looked again to see Beren sitting there saying "bubba". OOOOPs, left Nienna in the capsule in the lounge LOL