Being yourself, and how much [different] is too much? You'll never get a job looking like that!

I'm quite different to most of the women in my suburb.  I'm certainly quite different to the mums at my children's school (which is the single largest local community I participate in regularly). When I say different, I don't mean "I'm unique", because, well, we're all unique.

I've often spoken about not feeling like I am able to relate to other people much. It could be a language/thought barrier thing, whereby having spoken and thought in several language throughout my life, I sometimes make different connections between concepts than people around me.  Or it could be a sight related thing because I often find it very difficult to read non-verbal cues.  Or maybe it might even be an ADD thing, again, the difficulty of reading non-verbal cues comes to mind.  Whatever it is, I've also heard that many people feel the way I do in that respect, so it's evidently not uncommon to feel that way.

However, I also tend to differ from others physically - sort of.  Like most Australian women who are a size 14 or over, I'm no stick insect. I'm larger than life, and honestly, I prefer to be bigger.  I have been smaller and I felt very vulnerable. I really like my curves, I feel somehow softer and more feminine when I'm bigger.  I feel motherly and warm and comforting. So, I don't mind being a size 20 at all.

I don't dress like other women around me.  I have one friend who dresses similarly to me (or rather I tend to emulate her "look" a lot of the time - but sometimes not at all - because I really like it!), but she doesn't live around here.  I LOVE my clothes.  I love the way they flow and swish around me.  I love the colours, and that some of them have embroidery or beads on them.  I really love bright colours (though the photo below doesn't show my love for bright colours).  I like some mainstream fashions from time to time, but mostly I can't stand them, and prefer my wardrobe of eccentric clothing.

I usually wear a lot of jewelry out of the house - but not at home - I've worn less in previous years because I was often carrying my children, and they'd grab at it and sometime break it, or hurt me.  I love necklaces, bangles, bracelets and rings.  I love sparkly, gaudy, colourful jewelry - costume jewelry! 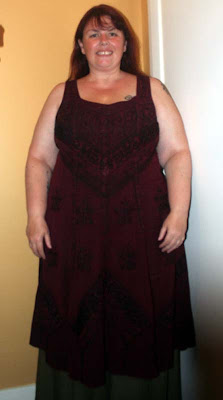 I have my nose pierced.  I've had my nose pierced for about 18 years now.  Once I had to take my nose stud out for a receptionist job and forgot to put it back in and the hole grew over.  I felt NAKED without my nose stud, like I was missing an essential part of myself, so had to have it re-pierced (it was far more painful the second time around). I didn't get my nose pierced because it was fashionable (although, I did take advantage of it being fashionable in the 90s), but because I always admired nose studs on others.


In the past couple of years I've gotten a number of tattoos.  Again, not a fashion statement.  These, to me, are body ART and very personal and significant.  They are meaningful celebrations of relationships in my life with myself, my husband and my children.  I have plans to get more.  Most can be concealed by clothing, though the one on my right forearm is almost always visible (I got it for my youngest child, but it signifies "eternal gratitude" which is something I like to constantly be reminded of as well). 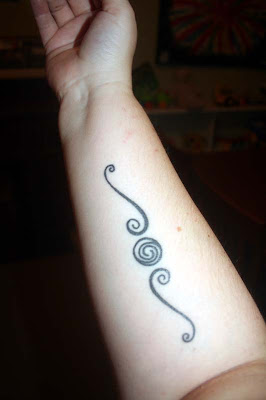 So, yes, in many ways I am visually quite different to women around my suburb - or even in wider Australian society (of course, there are pockets of society where you will find more people like me hanging out).

I really like me.  I don't try to be different to "stick it to" anyone, or to "get in your face" with anyone, or to "bring attention to myself".  I just love the things I've chosen for myself - the clothes I wear, the nose stud, and the tattoos.

I do realise though that people often decide what a person is like based only on their first impression - those first 30-odd seconds of sensory input when they meet a person.  I can be as friendly and funny and intelligent as I like, but if people are put off by what they see, then none of that matters much.

Lately, I've been really keen to shave my hair off again.  I loved shaving my hair off the other two times I did it!  Life is different now though.  I have tattoos now, and my kids are in school, which means I have to deal with people who aren't like me at all.  People who might look at me and be put off because I represent "the Other",  Something that they can't relate to.  There was actually a mum at our school who did shave her hair off, for about a year.  I'm not sure if she had cancer though, or was raising money or awareness for someone who had cancer, she didn't wear strange clothes or have tattoos or a piercing though.

There are other mums, and at least one teacher, at the school, with a nose stud, but they don't wear strange clothing, have tattoos or shave their head.

There is a mum who has tattoos (less obvious than mine), sometimes cuts her hair really short, and wears slightly more alternative clothing, but she isn't a large woman like me.

So, would it be going just that one step too far to shave my hair off as well?

The other thing I wonder about is working.  Can a large woman, who wears robe like clothes, has a nose stud and tattoos and a shaved head, work with children?  Most mums would probably be put off by that, right?  It might be really hard to get work, yeah?

I know I'll shave my head again, it's just a matter of time.  I would love Dave to get a job first though, so I don't have to worry that by shaving my head I'll be dooming us all to impoverishment because no-one will employ a skin-head, tattooed, pierced hippy-chick!
at February 26, 2011
Email ThisBlogThis!Share to TwitterShare to FacebookShare to Pinterest
Labels: Thinking

The assistant at Audrey's kinder was butch with a very noticeable tatt on her leg, she wore shorts a lot. I can't read minds but I don't think it mattered, people seemed to like her a lot, I know I did :) Not naive to think it wouldn't dissuade some people, but I don't think it's something so obviously requiring a change to be newly employed by someone. Really out there clothing would, like leather and chains or daily dressing as a faerie complete with wings etc LOL

You look normal to me...which may mean sfa considering what I look like and the people I hang out with.

That forearm tat is quite nice :)

Thanks guys. I've got to just let my wonderful sunny personality shine through, I think. LOL!