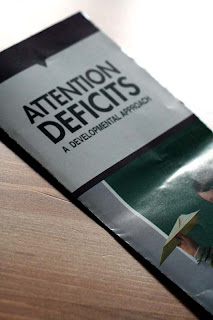 In each case, the symptoms must be present for at least six months to a degree that is maladaptive and inconsistent with developmental level.

When I took Lukas and Brynjar to the optometrist this morning, I spotted a stack of brochures on Attention Deficit Hyperactivity Disorder. I quickly grabbed one and stuck it in my purse to read later.

I was diagnosed with Attention Deficit when I was 18.  The symptoms in bold are the ones I lived with for my entire childhood and felt were my "failures". Despite being very bright, being assessed as having an IQ in the gifted range, teaching myself to read at the age of 4, being bilingual from toddlerhood and on and on, I never did particularly well at school, and in fact failed year 9 (year 10 equivalent) while living in Norway. My school reports were always the same, "talks too much in class", "distracts other students", "won't stay in her seat/the room", "takes a long time to settle into her work", "has difficulty completing tasks"...

A couple of years after reaching the dead end in my education in Norway, I moved to Australia to live with my dad.  One day I took myself off to my Grandmother's doctor to talk to him about my inability to sleep or to concentrate, and the four channels of continuous thought in my head.  I thought there was something very wrong with me.  He sent me to a psychologist and over a few visits, I was assessed.  I was told I had all the symptoms of something call Attention Deficit Disorder, though they couldn't be 100% sure because I also have a distinctly abnormal brain structure (part of the birth defect that results in my low vision) and the symptoms might simply be a result of this defect.  He told me there were experimental drugs I could be prescribed, but explained they had side effects.  He also offered to do some Cognitive Behavoural Therapy with me.  I decided to try the latter first and if that didn't help I would look at the drugs.

The CBT helped a lot, mostly in creating an awareness of the behaviours that adversely affected my progress at school.  It meant I could finish a TAFE course that would allow me to get into University.  The CBT didn't "fix" me.  I've never completed a degree in the required time - but luckily my low vision affords me extra time.  I've never held down a job for more than a couple of months.

The irony is that I have a physical disability that people assume is my biggest obstacle in life, and yet I struggle most with the fall out of having Attention Deficit, a disability that is invisible and that many people still believe is "not real". 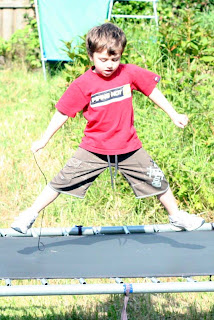 I hadn't looked at any materials about ADD/ADHD for a long time. It is painful, and yet, it also is freeing. Reading the pamphlet reminded me how well I do manage when I struggle with this invisible affliction every day of my life.  I muddle through and I've achieved quite a lot in my life, even though there are so many things I fear attempting because of the symptoms of Attention Deficit, because I have to keep checking with myself,

I am constantly reviewing myself and I still miss a lot of things. I still lose things and forget things - I'm very good at hiding it but I've walked away from my children in shopping centres, walked away from a wide open front door for entire days out, lost countless bank cards, taxi cards and travel passes. Without knowing why I was the way I was my mum had already started teaching systems for remembering things and methodically working through tasks so I could organise myself.  I'm very attached to my "methods" because without them I could barely function as a responsible adult.  Sometimes I feel half insane with the inability to hold onto a thought because it gets crowded out by all the other thoughts competing for space in my head, but I have coping strategies.  I find doing something with my hands constantly helps my brain to settle down.  I play a lot of bejewelled on my phone these days.  Other times I've kntted or obsessively kept a handwritten diary (several entries a day).  Writing helps a lot! I suffer terribly from restless legs - and hands - it literally feels like my nerve endings want to crawl out from under my skin. Those are the daily symptoms most people aren't aware of.

Sometimes I joke about having ADD, and I often here other people joke about having ADD/ADHD, but for the most part, when you live with it every day - when you really can't get away from it not matter how aware of it you try to be, for the most part it's no joke. There are aspects of this disorder that I kind of like - I never get bored! It's hard though when I see it causing me difficulties and I know other people don't see the root of those difficulties, only the symptoms and therefore aren't able to contextualise my behaviours.
at February 17, 2011
Email ThisBlogThis!Share to TwitterShare to FacebookShare to Pinterest
Labels: ADHD, human development