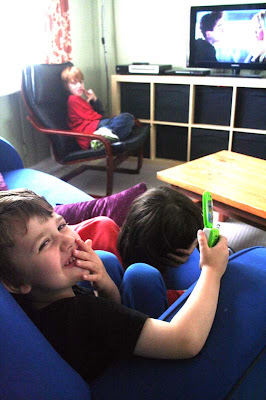 When it comes to what our children watch, my husband and I don't always see eye-to-eye. We've had several, let's call them, discussions about the boys being able to watch such movies as Batman, The Lord of the Rings series and the Harry Potter series.

Dave is far more desensitised to the violence and gore, or even just the high suspense in movies than I am. He's a bit of a film buff who watches all sort of independant stuff - and he's a fan of such directors as David Lynch and some Quentin Tarantino amongst others (he's like guys movies for guys about guys doing guy stuff - oh, and if they're old guys, all the better!).  So, anyway, I don't always appreciate his judgement of what is suitable for our four year old boy (whichever one is four at the time)...

After quite a few debates, I put my foot down one day and said he absolutely COULD NOT let them watch anything that wasn't rated G or PG, and even for PG, I wanted to have seen the movie myself before I was happy to let the boys watch it.

I wasn't just being a "wuss", I had learned the hard way that even PG rated movies could cause our boys distress - there were months of getting up to Luey after he watched Monster House when he was six.

Then, just recently a problem occurred to me.  I discovered that movies that had been rated M at the movies - such as later movies in the Harry Potter series - were now being screened on TV with the rating of PG (which meant my children were gagging at the bit to watch them because they are also painfully aware of my limits with regards to movies).  I've been TiVoing the movies, and watching them before letting the boys watch them, and it seems to me there is no editing being done to take out the parts that required the higher rating in the first place..

One tool, I've come to appreciate greatly is the Internet Movie Database.  It's a fairly comprehensive database of all movies, past, current and future, with cast, synopsis, trivia, but best of all a Parents Guide to most movies (well, all the movies I've needed to check so far, anyway).  The parents guide pretty much covers every incidence of violence, profanity, and sex or drug use or reference in each movie.  This is NO SUBSTITUTION for actually vetting a movie yourself for your children, but it certainly helps to have some idea of what's in the movie, and if you're vetting a movie that has had it's rating reduced, you can check against the guide what scenes were removed - if any!

The best thing for me, is that I can get access to this database on my iPhone!  IMDb have an app in the iTunes store and it's FREE!
at February 20, 2011
Email ThisBlogThis!Share to TwitterShare to FacebookShare to Pinterest
Labels: Family life, human development