What fixes most things for me?

No, I'm no fan of cleaning and tidying.  I'm as lazy at they come.  If I could afford a fleet of servants, I'd never lift another finger.  Sadly, the reality is, I don't have any servants, just a husband and four children, and while I can often boss them about and make them tidy up a few things, this hardly makes a dent in the trail of debris they generally leave in their wake.

I'm not the neatest person in town - just check my side of the bed...  However, I always tidy up within a few days (and then let the pile of discarded clothing build up again for another few days), and really my bedroom floor is my only vice.  For the most part (and my mother will laugh OUT LOUD when she reads this, I put things away as soon as I'm done with them).  This is a habit I've refined somewhat since having all these children, mind you - and maybe they'll do the same when they have children, I sure hope so!

All this said, there is definitely a gulf between my dear heart and myself when it comes to the acquisition, storage and maintenance of STUFF!  I like to acquire a helluva lot more stuff than he does.  However, he likes to keep anything and everything remotely related to anything he brings into the house - from the bag and receipt it came with, to the packaging, and the item itself.  And it doesn't really matter what the item is, either.  It might be a CD, or a book, or newspaper, or bus ticket.  He keeps it ALL!  When he is not actually using the things he keeps, he "stores" them in first place he can reach that is not directly under his feet.

My husband LOVES shelves, tops of cupboards and bookcases, or assorted non-descript plastic bags piled on top of one another for storing his STUFF.

Me?  I don't keep receipts, or bags and definitely NOT packaging.  In fact, if I haven't used an item in six months, or a year (if it is a season item), I find my fingers ITCHING to get rid of it.  I've had to learn to assess the sentimental value of items which will one day be a precious reminder of my children's milestone.  Photos are easily.  Paintings, old toys or clothing are much harder.

I have a habit of ordering a three cubic metre skip at least every year, sometimes more often, for the sole purpose of chucking as much unused stuff as possible.  I find the process of decluttering very soothing.  It's like having a fresh start, and more space to breathe and think.

So, with no studies hanging over my head, and three children at school most of every weekday, I've set myself the task of working my way through the house, and working towards ordering another skip in March.  No, I'm not going to just throw out everything.  I'm going to try something new.  I'm going to try and sell some of the stuff that has to go.  But there is still a lot of stuff that can't be sold or given away because it's actually rubbish (paper rubbish and packaging are always accumulating in this house, we are massive consumers of paper!).

I weeded through my wardrobe, and pulled out about 20 items I've either worn into threads or outgrown (or was never small enough for - oops).  I completely forgot to take before and after photos.

I also sorted out three of the four drawers in our filing cabinet.  The photo below only shows the first drawer, and doesn't even really show the several hundred birthday and Christmas cards that I'd managed to collect over the past 12 years (I was TRYING to learn how to be sentimental, and kind of went too far the other way and then couldn't face the job of sorting through the mess).  It was kind of fun, I found the list I'd made of all the outfits I bought for Erik before he was born - can anyone say "overkill"?

And then I decluttered the cabinet my printer stands on - and found the missing assignments from my Masters with the results and comments on them from my lecturer, so I can finally prove I deserve that Distinction I was sure he'd already given me! 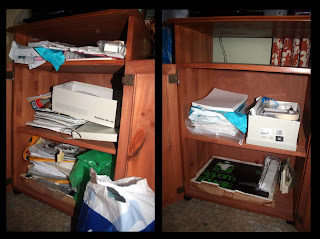 And tonight after Ari had gone to bed, I went through his toy boxes and took out all the toys he's outgrown (the ones Dave and I had already decided we don't want to keep for future grandchildren).  Two garbage bags full to be sold at a kids market in March. 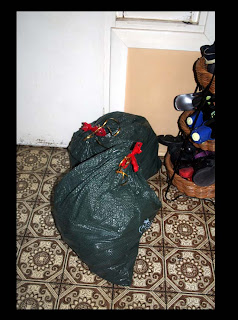 Of course, the more you declutter the more you realise just how much stuff you still need to get through.  Our study actually looks worse right now than it did before I started on it this morning!  It does feel better know that the filing cabinet isn't full of Telstra bills from 2001 though!
at February 15, 2011
Email ThisBlogThis!Share to TwitterShare to FacebookShare to Pinterest
Labels: events, Photos