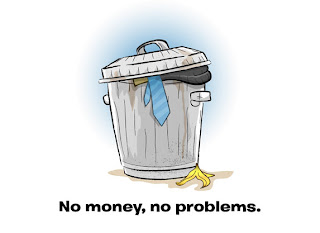 I've been told by people that they were "in some ways" happier when they had less money. I've been told I'm "lucky" not to have a mortgage hanging over my head. I've been told my children are lucky because they get to see their parents all the time (hey, I totally agree that parental presence is a huge boon to children, not saying it isn't).

Apparently, Dave and I have it great! We don't realise just how fortunate we are that he doesn't have to be at work until late at night, and we don't have to stress about having two incomes to meet the house and car loans.

What gets up my nose is that when people are busy telling my how lucky (and obviously ungrateful) I am to be a renter with no job, they refuse to acknowledge how they could be as lucky as me! How they actually have the CHOICE.

Hey, if you don't think your kids are seeing their parents enough, if you feel the pressure of the mortgage and the car loan is too stressful, if you wish you could spend all day with your children like Dave and I do, it's really easy! Just sell your house, and your car (or cars), get yourself fired so you're eligible for unemployment benefits or the parenting pension and family assistance! You can do it! Honestly, it's within reach for you, too!

We, on the other hand, don't have choices. We can't choose to go to work tomorrow, get a mortgage and car loan and not see our kids for most of every weekday.

You see, it doesn't look quite so "lucky" when you're living the only choice you have.

We're not living like this because it's a lifestyle choice.

I used to say that money isn't everything. I didn't have a lot of money back when I was saying that, and Dave was only working part time at the time, but I had more money than I do now. I had enough.

I had enough money that we could afford to do some of the things for our children that they saw their friends doing or receiving.

I had enough money to occasionally intersperse the needs with the wants (without having to have an anxiety attack before, during and after).

I had enough to feel that not having everything wasn't a big deal.

People who claim cutting back isn't that bad and is something everyone should at least consider doing are people who can afford to cut back.

People who believe they were happier when they had less are people who probably have more than they need.

We have no debt and I'm very grateful for that. We also have no disposable income and that is a bad way to be because that's when I struggle the most to remain debt free out of sheer desperation for some sense of levity. I just want to relieve the pressure and do something spontaneous (spontaneous is very, very bad when you can't quite afford the basics).

Dave received another rejection letter this afternoon, for an unskilled position. He didn't even get an interview. Money may not be everything, but I don't want everything, I just want a break from this financial pressure. Honestly, I wish I had the options of the people who tell me I'm so lucky when I have no other options.
at March 16, 2011
Email ThisBlogThis!Share to TwitterShare to FacebookShare to Pinterest
Labels: Family life

So very true and such an irony, that those who bang on the loudest about money not being important, usually have plenty of it, and then some more. LOL

I hope things are better for you guys financially soon. Massive *hugs*

I know how it feels to be rejected over and over from unskilled jobs, so I feel Dave's (and your) pain on that.

We're doing pretty well - I know how lucky we are to be stressing over a mortgage and bills while living in a comfortable home in Sydney - but I can understand what you mean. Whenever I see people say something like "just give up your daily cup of coffee for a week..." for such-and-such cause, I think GAH, I don't buy coffees! It's easy to give that up if you have the money for it in the first place! But all our money is allocated away before it's in our hands, so don't tell me to give up some of the "spare cash" I don't have.

Anyway, as a mortgage-having person I probably sound exactly like the people you're complaining about, sorry! But what I mean is that I understand what you mean. I know I'm lucky to spend every moment with my children, but that doesn't mean I'm lucky to not have any income of my own. And I would never tell someone they're lucky to not be employed at all.

Hope things look up for you guys soon!

I know people might say, "Well, if you're so broke, why are you buying a new dress for your graduation, and why did you go out to dinner the other night, and why..." They thing is, we occasionally do those things when we thing we have a little bit spare, and then some unexpected cost comes along, something small, and we're up shit creek and we're thinking, "I shouldn't have..." spent money on something that really wasn't a lot but enough to mean our kids will miss out or we will miss out (at least on sleep for a week), and I keep trying to remain positive and to say, "This won't last, Dave will get a job soon. Something will come along and we'll be fine." but it's hard.

I get why people have mortgages, I would love a mortgage to worry about (because even though it's still worrying about monthly payments, while you can keep them up you're okay - whereas in a rental place with no savings, even if you are keep the monthly payments up, they can tell you to leave and then you're really in the shit because you have no savings to move with and pay another bonds + first months rent with).

I just want to cry when someone with a job and their own roof over their head suggests I'm ungrateful for not recognising how lucky I am not to have even half their gross income, because my kids get to see their dad so much and we don't have a mortgage (what do these people think rent is, monopoly money?).

On topic. My observation of people (extremely broadly generically speaking) is that they find it very easy to flap their faces about what they can see but don't seem to quite have the imagination or ability to think outside their own skull to wonder how or why it's like that.

I'm sure I'm also not seeing what it's like to have a job and a mortgage and a car loan to pay off, or private school fees, etc. etc... I guess I'm just thinking those things are choices, people choose to have those challenges, whereas we have absolutely not chosen to have our challenges and cannot simply choose to extricate ourselves...

I know there are people who are far worse off than us, too. One of Dave's close friends from way back in his teens (you know, when dinosaurs roamed the earth - they've been friends a loooong time) is over in Japan right now trying to convince his wife to leave with him, but she is from Sendai and all her family is there, and culturally she is not inclined to "just leave", so they're in a terrible position, much worse than us. Perspective, I guess, but I still feel so crap about our situation too...

I think people who have a bit of money feel guilty around their friends who don't...they either want to make themselves (or you) feel better by looking at the supposed upside of your situation.

Also though, we all get caught up in our own shit and forget to count our blessings. I know that with our situation (me and DH) where we often want more than we have (like many) we can forget how fortunate we are. It's good to have a reality check now and then...

I always remember, there is always some better off, and always someone worse. And for you guys I certainly hope your financial situation gets better/easier for you this year.

Thanks Rach - I can't help but think something has to come along somehow...

Funny, when we would living the last place and Dave had his job, I said several times that we always had just enough, that we lived something of a charmed life, there was always just enough...

There is always enough now, too, but it hurts that that is only because MIL subsidises us. It feels wrong that we are asking her for help so often and can never repay her.