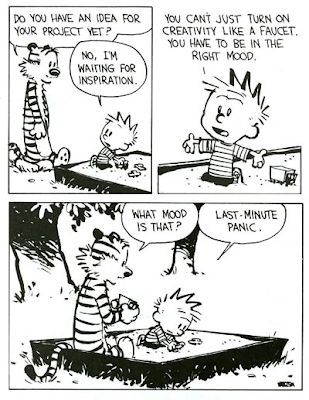 One of my husband's half a dozen favourite authors (he made me write that because he doesn't want to be pinned down to one preference) is Raymond Chandler, he was of the practice of locking himself in his writing room for several hours a day and would not allow himself to do anything other than write. His advice to budding writers was that they didn't have to write during their allocated writing time, but that they should do nothing else.  They could writhe in existential angst on the floor, but they couldn't read, doodle, file their nails or any other activity.  He believed that a writer would write just to stave of boredom.

While I try to write on this blog several times every week (my goal would be to write at least once a day), I have to admit my writing habits are shameful.  I love composing in my head, but I find transferring those words to the screen or to paper ultimately disappointing.  It's as if my ideas lose their luminosity once committed to some form of semi-tangibility.

Of course, I really do need to get past this. I've been easing into it by painting (haven't done that in a few weeks either). That probably also sounds strange but it helps.  When I have a painting in my head and then transfer that to a canvas, usually with virtually no success, I manage to both work on my issues with perfectionism by just doing it, and I find that failing to achieve my intended goal on canvas doesn't sting as much as when I put words to paper - mostly because I don't consider myself a painter (it's okay to fail at something you already have no hope at being good at, you see).

I'm still brewing the two stories I mentioned a while ago. More and more I'm leaning toward the prequel of Hidden, but the Obstetrician's Daughter is still fighting for space in my head. I need to start a couple of journals, but fear putting any of my ideas into the tangible world and seeing my ideas wilt under the heat of expectation and review.

And then life often gets in the way. Sigh. I have done my share of "writhing in existential angst" over the years, especially during the MA years.

I did a short writing course once and was told the exact same thing. Even if it's 30 mins, if you do it everyday you'll get there eventually!