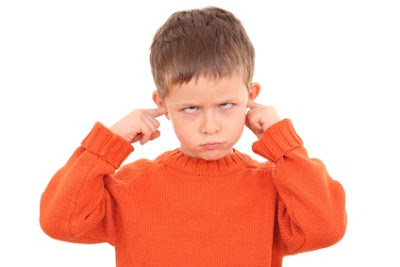 Is upping-the-ante a issue of personality or respect?

What makes some children do it and some children not do it?  I've always wondered about this as my children don't do it. Quite frankly I wouldn't tolerate it if they did. When my children do something I am not happy about, I let them know and I explain, but I never live in fear of this making them do the offensive thing MORE, and yet I constantly hear other parents say that they ignore behaviours that frustrate them because if they pay those behaviours any attention, then the child will doing the offending behaviour more often or with greater fervor.

Is this really a personality trait?

I guess I would view it as a lack of understanding or respect, or perhaps my child being so desperate for attention that even negative attention is worth upping-the-ante for?

I know a lot of modern parenting eschews battles of wills with children, but I guess I'm not a modern parent in this respect. I don't see setting boundaries so much as a battle of wills as me doing my job (setting the boundary) and them doing their job (testing the boundary to make sure it is secure and will keep them safe). I am more than willing to enter into such a "battle of wills" over issues I feel passionately about. Gun play is one of these areas. I have had some disturbing encounters with guns in my life time and don't see gun play as harmless in any way. I refuse to tolerate my children playing at shooting one another or others, even with 'stick guns'. When Erik and Luey were 5 and 3 they started making guns out of lego, and I said that wasn't okay. I sat them down and told them why I didn't like guns and why I wouldn't tolerate them pretending to shoot with guns in our house. On occasion since then, they have attempted to create guns or engage in gun play and I've immediately and decisively shut down all such play.

When they have been given guns, I've very quickly disposed of them.  I will not tolerate them.

I would definitely not tolerate my children not respecting my issue with guns. To me "guns" could be almost anything. As they grow into teenagers, "guns" could be "drinking alcohol" or whatever you like, really. Unlike so many parents I've heard, I don't believe that setting boundaries will "make them want to do it even more". Kids and teenagers already want to do things we don't want them to do, us not wanting them do stuff, doesn't make them want to do it more - otherwise we'd all desperately not want them to go to bed early, eat all their vegetables and be considerate of others...

If they were not able to respect that this was important to me, I would view that as a sign that I needed to teach them more about empathy. I model empathy and respect to them (you know, most of the time, I'm no angel), I take seriously their issues with dogs, clowns, and mushrooms, and I expect the same sensitivity from them. There is no room for upping-the-ante in that dynamic.

Children live up or down to our expectations of them.

So, maybe when parents says, "I ignore the behaviour, or it gets worse", what they're really saying is, "It's really not that important to me", or "I can't be bothered battling with the child over this even though it is important to me", or even "My child will taunt me and that scares me".

Upping-the-ante as a personality trait is not something I would wish on any of my children and it goes against my understanding of children as innately social creatures.
at April 19, 2011
Email ThisBlogThis!Share to TwitterShare to FacebookShare to Pinterest
Labels: human development