We got back home from out epic coach trip last night at about 8.45pm, after getting up at 4.30am and being on the go from that moment on!

The first thing I want to say about this trip is that I was BLOWN AWAY BY AWESOME MY BOYS WERE!!!

I honestly thought travelling with four boys aged 2, 5, 9 and 11 on a train and coach for 12 hours was going to be HORRENDOUS! It wasn't. The boys were so considerate of everyone around them that we received many congratulations and much praise for how lovely they were! On the trip to Adelaide one young guy loaned Erik and Luey his iPad to play "Connect 4" on - can you believe it! I was very impressed with his level of trust for them with his expensive toy!

I did get caught unprepared when four hours into our Adelaide bound journey, Ari coughed up a fountain of Up'n'Go mixed with passionfruit yogurt muesli bar and scotchfinger biscuits. I sat there a-gape, confused and horrified that one of my children had just vomited RIGHT NEXT TO ME! Then he did it again! It was only now that it occurred to me to grab the "sick bag" tucked into the pocket of the seat in front of us. He threw up two more times and I was reasonably impressed that I didn't follow suit! Then I had to mop up the vomit all over his seat, my coat, and his clothes. I stripped him down to his nappy, and put his hoodie (which he hadn't been wearing) back on him and that is how he had to travel for the next 8 hours. I don't want to think what bystanders thought of us when we piled off the coach for breaks and my baby was wearing nothing but a nappy and a hoodie (parenting FAIL).

But we did get to Adelaide in one piece and then made our way up to the Barossa with Mum and Lester.

Friday was spent resting and shopping for birthday presents for Lester and Dave.

On Saturday we were up bright and early to get ready to head down to Adelaide by 9am. Before we headed off Lester received his presents and cards, and then he and Mum had a suprise for me! They gave me this gorgeous silver Pandora bracelet with three stones representing my dress (red), my Masters hood (turquoise) and my Thesis cover(amethyst) and two charms - a double heart from them and a mortar board to represent my graduation. 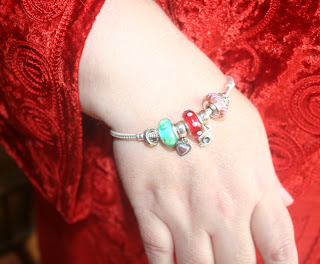 I managed to get a photo of all of us together - this almost never happens as I'm usually the one behind the camera! Don't I have handsome menfolk??? 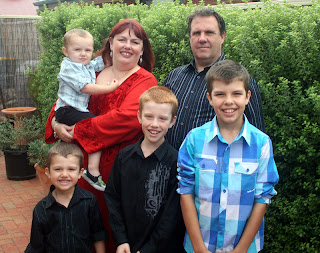 Once we got down to Adelaide, after a lunch of Hungry Jacks (yum, yum!), I donned all the garb - which involved much pinning with safety pins and me affecting the walk of an emu with tetanus. 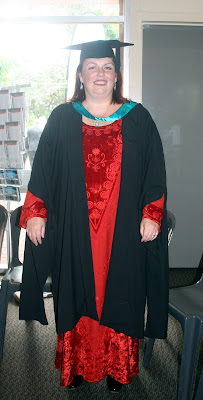 Erik was in charge of the camera, and considering he didn't get much in the way of instruction - because I was now bustling around like a tetanus infected emu with its head cut off - I'm not going to complain about the quality of the photos. (though more instruction will definitely be in his near future) 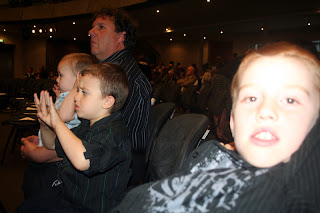 Once again the boys were fabulously well behaved! I listened to all the screaming and screeching going on around us by various children and ticked each one off, 'That one's not mine, nor is that one...".


We all paraded into the room, and then there was a song and a speech and we parade out of the room again and lined up out in the hall. There were five of us in the Masters degree but only four of us were in line and we weren't sure what had happened to the fifth until someone came by and said she was going to be late and therefore wasn't going to be allowed to participate in the ceremony. We were all upset by that, but there was some petitioning for this student behind the scenes and finally she joined us at the very last minute, so our little group was complete!

I wasn't really nervous until I got right up to the door, and then suddenly I felt quite sick. The heel on one of my shoes had broken and was getting caught on the carpet and although I'd done a practice run going up onto the platform and down again, this only meant that I knew I absolutely could NOT see the steps going down. I had been offered a guide to go with me, but I really hate that kind of attention being put on me - and the questions it inevitably leads to, so I'd opted to brave the platform alone. As you can see from the photo below, I did manage to get up there, and receive my papers and get my photo taken AND then I managed to step down from the platform without breaking anything - GO ME! 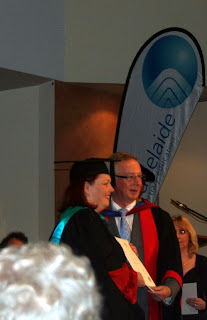 Once our entire department had gone through we all piled back onto the platform to have a collective photo taken. 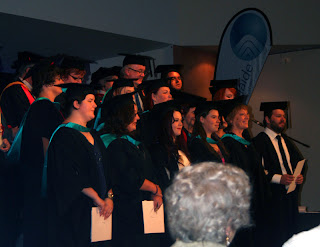 Once all the departments were through, it was time for The Charge to the students, and none other than my very own mum read this out! 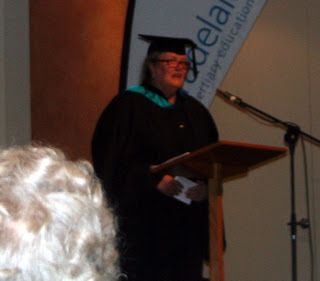 
I was disappointed to realise that I didn't take any photos of me with my good friend (and second mother) Ruth Jericho. Ruth and her husband Kevin came to the graduation and also came out to dinner with us afterwards. I did, however, get some professional photos taken with them after the ceremony, so I'll put those up at a later date.

After the graduation I had a terrible, terrible tetanus emu induced headache, but I took a couple of Panadeine and headed out to party! There are no pictures of said partying!

Sunday was Dave's birthday. After some present and card opening we headed out to Kapunda to give the boys a chance to run off some pent up energy and feed some ducks. 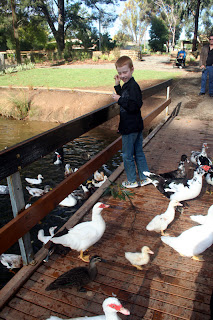 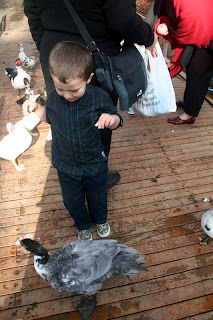 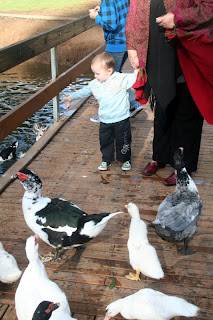 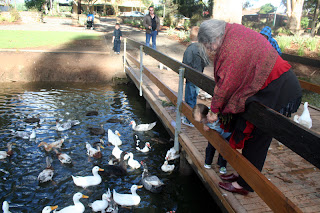 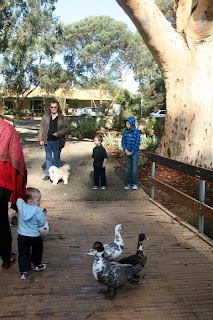 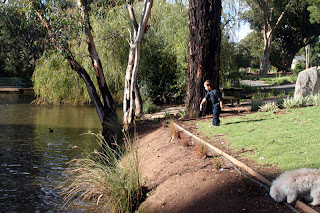 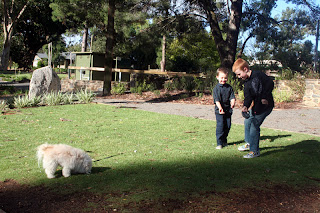 Ari thought better off feeding the ducks all that good bread and made sure he had some for himself! 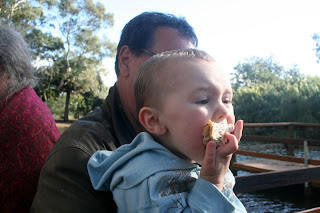 From Kapunda, we drove a short way to the Wolf Blass winery where Mum and Lester gifted Dave a couple of bottle of DELICIOUS moscato. Then we decided it was time Dave saw Maggie Beer's Pheasant farm, so we drove another short distance and had some gourmet icecream and coffee - and I bought some fig and pomegranate jam (which is so gorgeous I can't even describe it!), and finally it was home again for a hot dog party and some cake to celebrate the two birthday boys! We adorned the cake with 11 sparkler candle to represent the 11 decades they'd been alive (combined, of course), but the sparklers should have been called Fizzers, because they sure didn't sparkle much! 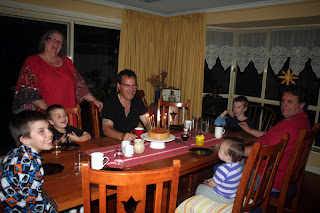 Then there was nothing left to do but pack and set the alarm for 4.30am.

It was a BIG weekend, and none of it has really settled in my brain yet. I'm already thinking about the next big project (preparing to apply to do my Doctorate), but I won't get into full swing with that for a few days yet - I'm simply too exhausted!

PS. My apologies for not doing last week's Friday Fiction or Things that Made Me Smile Recently, those will be back on the regular schedule this week!

Oh, I almost forgot...  Today was the day I promised to shave off all my hair...

Oooh exciting post, you looked awesome, the dress was perfect!! I am delighted you had such a successful trip, both the 4 boys travelling and everything else :) :) congrats again, all that work rewarded, yay :)

Congratulations, I agree the dress is gorgeous. Yay to your boys for being so patient on that long trip.

Congratulations Sif. I agree the dress was beautiful and just perfect for such an event.

Yah for such a lovely weekend.

Thank you guys! It seemed to take so long to get to this point, but now that I'm past it, it all seemed to happen in the blink of an eye - funny, isn't it?