Ooops, where did the week go...

To say it's been a big week would be an understatement! Here are some of the highlights and lowlights of the past few days...

Thesis: Ay! I hear you all moan, "Is she never going to stop with the thesis talk???" I promise I will soon! The graduation is coming up in a week from tomorrow but before I could graduate I had to get my thesis bound. First I had to do a tiny edit (I had to change ONE word - just one itty-bitty word - from "Australian" to "Non-Icelandic"). Then it was off to the bindery. For those of you who voted on my blog post about what colour the thesis cover should be, I ended up going with amethyst. The lettering is in purple, it was going to be silver, but apparently there isn't enough contrast, so purple it is... I spent most of a day trying to figure out how to combine the four files for my thesis into a single .pdf, and finally followed some advice to save each file as a .pdf and then download some free .pdf merging software and merge the four files into one. Shall pick up the volumes (3 hard cover, 2 deluxe soft cover) on Tuesday afternoon. Can't wait!!!  Happy-happy, joy-joy!

Submitting manuscript for publishing: This week I've managed to get as far as editing it with some final changes and inclusions in preparation for submitting it. Sadly, I haven't submitted it anywhere yet (and have quite possibly missed great opportunities for submitting unsolicited works) because the publishers require a resume - pathetic, I know! I used to have my own resume writing business, and yet this task is overwhelming me! The thing is, I haven't worked, like ever! I have had a few things published, but I couldn't tell you the titles of the articles or the fiction, nor WHERE and WHEN I had them published. I just haven't kept track. In hindsight, this was pretty stupid (and I suspect I may be the only writer in history who doesn't have a record of all publications stowed SOMEWHERE), but there it is. My resume would kind of suck, and so I haven't written one yet. I aim to get over myself by Sunday night though, so I'll keep you posted.

Dave's job interview: Dave applied for a job that he had applied for in June last year (but had been pipped at the post after the final round of interviews) last week. He received an email on Thursday last week stating that he would automatically qualify for final round interviews this week. On Tuesday he received another email asking if he could come in Thursday morning, and then on Wednesday he was sent a document to transform into a pamphlet. Because of the late notice for the project, Dave ended up staying up all night Wednesday night to complete the task, then went to Officeworks at 7am yesterday morning to print it out. The pamphlet looked GREAT! His interview was later yesterday morning. At midday today he received a phone call, and unfortunately he had not succeeded in his application.  He got so close on both application, but was rejected both times. He's being very stoic about it, but I have to say I'm not as strong. Today marks the 2nd anniversary of his being made redundant. He has applied for so many jobs. He has been well and truly qualified for every job he's applied for. He's only gotten a handful of interviews, and still no one will give him a go. I just don't know what else we can do, and goodness knows we really need the money! Waiting for the outcome of this job interview has been the main reason I haven't blogged all week. I didn't want to post about it before it happened, but had a mental block on every other topic.

Therapy! So, I felt pretty crap this afternoon after the phone call about Dave not getting the job. When I'm feeling crap, I find cleaning and sorting stuff really helps to lift my spirits (I guess it gives a sense of control over something, and satisfaction over having conquered something, even if it's just toys sprawled all over the floor). I decided to sort out my jewelry as it's been bugging me for ages that everything was tangled up in my various boxes, and something things were hiding from my best efforts to find them! I went to the $2 Shop and bought 25 chiffon-y draw string bags - 15 small and 10 large, they cost me $10 all up. Into these I sorted necklaces and bracelets mostly. Most of the bags have two or three items in them - I really need a bunch more bags! I have a bag of anklets, and one full of pendants without chains, as well. I didn't put any earrings or rings into the little bags because there just weren't enough.

Dave bought me many pieces of jewelry in the early years of our marriage, but honestly I never was very good at taking care of them, and he grew tired of finding bits and pieces laying around the house, so stopped buying jewelry for me after a while. Still and all, I have a LOT of jewelry, as the pictures below evidence! I thought I was quite clever recycling an old animal cracker container to keep all the little bags in! Okay, so it's probably a bit tacky, but it sure does work! 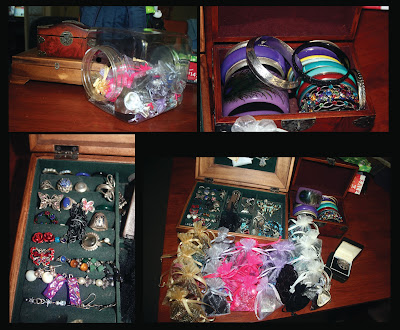 Sorting all of this made me feel a lot calmer about the whole job seeking issue and the lack of money issue.
at April 01, 2011
Email ThisBlogThis!Share to TwitterShare to FacebookShare to Pinterest
Labels: Family life

That's a BIG week! I love sorting and cleaning when I'm stressed out too, definitely helps me feel more in control. Unfortunately the motivation is lacking at all other times!