This post - being about things that aren't BLAH - will contain images and sentiments too saccharine for some, you have been warned!

Life is never all bleak, even when - in the moment - it feels like it is, and all you want to do is scream at the universe like a toddler tantruming that this is "NOT FAIR!!!"... So, here are some of the things that I've been noticing through my foggy SADs...

The ingenuity of my children. They're completely obsessed with Doctor Who at the moment, and just before Christmas we found out we could actually buy replicas of the Doctor's Sonic Screwdriver (an all-purpose Swiss Army Knife-ish implement the Doctor carries with him at all times). Unfortunately, while the full size replica was reasonably prices at $39.95 a piece, with four children - who would ALL want one - we were looking at $120 worth of Sonic Screwdriver! So, that plan was shelved. It didn't take the boys long though to figure out how to make very cool looking Sonic Screwdrivers out of lego!


Last Saturday night was the first screening of the first part of the first episode of the 6rh Doctor Who season (of the revived Doctor Who), and we all gathered together as a family! (Dave officially hates me and has cancelled Mother's Day because I'm posting this pic of him, so be kind - it was the end of a long, hard day of excitement waiting for the new season to start... Might as well have been waiting for Christmas Morning, as far as the boys were concerned!) 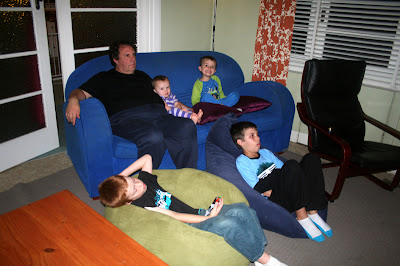 Last Sunday morning Erik and Luey went to the park, and when they came home, they brought this chair with them! Someone had put it out on their nature strip. Besides a couple of small cracks in the leather at the front edge of the seat, it's in great condition, and SO much better than the old backless officechair I was sitting on before! 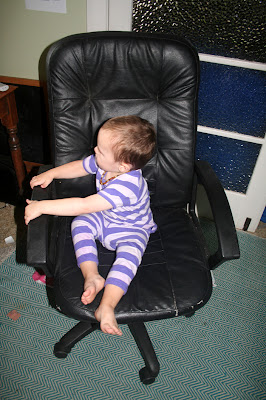 I've paid my "parental sleep deprivation" dues, so I'm going to boast about my sleeping baby, and how much joy he brings with his love of sleep! He was completely weaned off his day nap until the Easter holidays, but then took to them again because the boys managed to tucker him out by lunch time and he'd go feral and need a sleep, which means he's up later at night at the moment, but hey, 9pm isn't that late - not compared to many I  hear from! So, here's to the sleeping baby! The pics with the red blanket are from this afternoon, and he was all rugged up against the cold, and using Buddy to keep his face warm by the looks of it! (our room is FREEZING in winter). 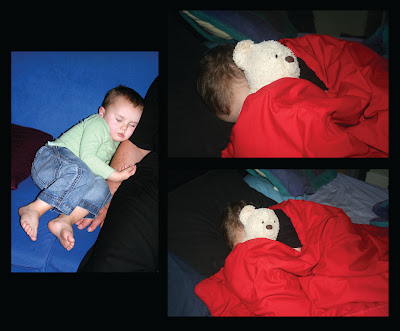 I picked up some very cheap acrylic yarn at the Reject shop, and knitted Ari this elf-cap. I have to bribe him to wear it (he is decidedly anti-hats!), but oooheeee, he's so cute in it, and the colours are so cheerful! I have a heap of this yarn left if anyone wants an elf-cap for their baby! 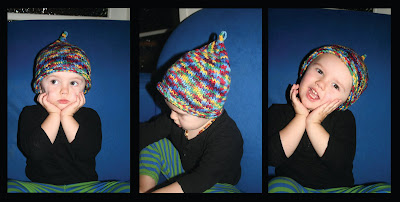 This week Dave signed up for a short course which is 99% guaranteed to see him in the workforce by the end of July. I can't say anymore about it, but I'm very excited that we might see a real income in this household in the next few months. I honestly believe it will make a HUGE difference to our every day!
at May 07, 2011
Email ThisBlogThis!Share to TwitterShare to FacebookShare to Pinterest
Labels: Family life.

Love the elf cap and the dr who excitement :)

Love the Lego screwdriver too, much cooler than boring old replica one!