Erik the Red - Viking at large! 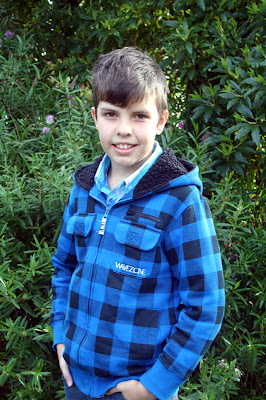 Erik Keith Michael:
Born 06/07/1999 at 4.50pm after just over 8 hours of induced labour - he was happy "inside", and even when we booted him out at 14 days past his estimated due date, he wasn't in a rush to meet us. The first time I gazed into his wide black eyes, I could have sworn he was not impressed at having been "pushed along".

Today the lad turned 12. He has officially started his final pre-adolescent year. Erik has always been young for his age. Very bright, very artistic, very sensitive and very innocent - it shows in his face!

I love that he is not in a rush to grow up. Nevertheless, the tide cannot be held back and slowly but surely he is leaving boyhood things behind and taking on the preoccupations of adolescents (music, technology and identity crises - so far)...

More and more these days he is interested in discussions on world matters. Tonight at the dinner table he wanted to know about the carbon tax, and whether it was really worthwhile. He wanted to understand how it could be that we humans are managing to deplete natural resources faster than they can be regenerated when thousands of generations before us didn't do this. He had heard people talking on the bus about the waster of time they thought a carbon tax was, and he wanted to know why we - his parents - would support something that other people think is a waste of time. He is a questioner - just like us.

On several occasions recently, I've had cause to think of some advice I was given many years ago when starting a business. There is a lot to be gained from patience, from biding one's time and letting the business grow at a steady rate that is within one's ability to cope. If a business grows too fast, all the motivation in the world might not stop it from collapsing in on itself. I've been thinking about this in relation to my writing career and my blogging pursuits, but today I found myself realising it can also apply to growing children.

In some ways, there is such a rush for children to grow up these days, which is juxtaposed with the great push to protect children from the harsh realities of adulthood, and it's a bit like encouraging a beanstalk to gain height before it has a chance to harden the stem it already has. Under those circumstances the stalk will collapse under it's own weight. Tall trees must either have wide roots, or must grow in close proximity to other tall trees for support against the wind.

I'm glad Erik is growing at a steady pace, even if it sometimes seems to lag behind that of his same age peers (in that he is relatively innocent and naive). I believe he will have the opportunity to develop some fortitude before faced with the wild winds of adolescences that many children seem to rush headlong into with their parents cheering them on because they believe it will make their children succeed in life.

Take it slow, Eriky boy, and ask many, many questions! We will always be hear to bounce ideas off!

Happy Birthday Erik! Lovely post :) (and I spelled his name right this time ;))