Tonight a friend posted the following image on Facebook...

The geeks among you may recognise this as Gallifreyan script. More specifically it is the inscription seen on the side of the Doctor's crib in the mid-season cliff-hanger of the 6th season. Most people assume it signifies the Doctor's Gallifreyan name - which is MASSIVE secret that all us Whovians are waiting with baited breath to have revealed to us. After all River knows his name, so it's about time we knew it, too!!!
Isn't it pretty? If you Google "the Doctor's name in Gallifreyan" you'll soon come upon this image - it has done the rounds on Tumblr. You'll also see that many a Whovian on this planet is planning on getting this tattoo'd on their person. I have to admit, I want it tattoo'd on my person because it's so me! It's all full of circles just like my other tattoos (well, two of them).
I was thinking it would look really nice on my inner left forearm... 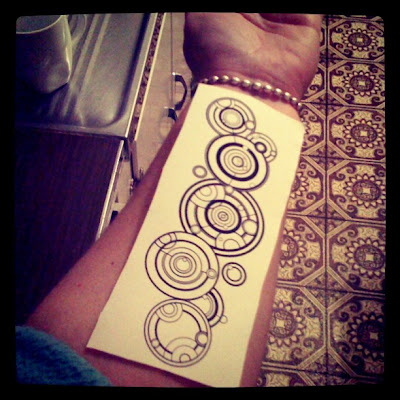 However, it contain a number of very fine lines, and my brother (who does all my tattoos because, while big and hairy and tattoo'd, he's, well, my baby brother!) is always saying those tiny lines are the first to bleed or drop out... So, it might need to be bigger and be somewhere like my back... Maybe down my spine...
Maybe I should make it a tramp stamp??? (for the uninitiated, that's a vulgar term for a tattoo on the lower portion of you back).
The thing that plays on my mind is that we still don't know what the Doctor's name is. What if he was name "Great Gallifreyan Git"? I'm not sure I was a tattoo that says "Great Gallifreyan Git" on my person. Okay, so most people wouldn't know what it meant, but enough of people maybe - millions of people watch Doctor Who!
Also, it might not be the Doctor's name... It might be the same of some loser Time Lord... It could be like having one of the lesser Baldwins... (yeah, yeah, I'm old...)
But, it's is so pretty, so whimsical.
at July 04, 2011
Email ThisBlogThis!Share to TwitterShare to FacebookShare to Pinterest
Labels: Thinking

I agree, it is pretty. It would make a top tattoo!

I would make a great tattoo! All those circles! I've been told circles are hard to tattoo as well as all those fine lines, but it would be gorgeous on skin!

Yes, that's what my brother says too, unfortunately for him, All my tattoos are well roundad, haha!

The doctor's name is Theta Zigma, in an episode in the Key of Time series it gets leaked by accident. They covered up afterwards saying it was a nickname but we know better!

It's beautiful image, like bubbles or crop circles! Would make a pretty tattoo.

Rule #1. The Doctor Lies. I'm not sure I believe his statement that the crib was his in the first place. Maybe it's the name of one of his children? Maybe he even knew Amy was naming her daughter Melody and it actually says Melody Pond in Gallifreyan and he played up the surprise at the name (a bluff he's quite good at) and then when River led him to the crib he got the "ah ha!" moment from the script And from the Gamma Forest leaf.... Just a thought. Regardless, it would be a gorgeous tat!

The Theta Zigma college name is an interesting angle, but still doesn't explain 'who' he is, you know? If you're told a guy is named John, you think, okay, yep, John, but then if you're told John is, in fact, a destroyer of worlds, well, that evokes a completely different response... Maybe the symbols on the crib say 'destroyer of worlds'...

Jackie, yep, the design (no matter what it actually represents) is very appealing!

Xamora, you're right, the doctor lies! And so does River, so neither of their reactions can really be trusted. Looking at the crib, there are different symbols on each side and while Amy looks at the symbol on the side of the crib, River points out the symbol at the end of the crib to the doctor, I think, so not even the one people are calling the doctor's name...

There are lots of translators and people who know this very well. Since I've read a bit, this looks a lot like numbers to me (because of some bigger lines)
Did no one try to translate it?

I have never seen a translation, but since Demon's Run, the cot and this symbol has not featured again. I'm now thinking it was another Moffat throw away red herring...

i know you don't know me at all, but i did actually get this tattooed on my person.
http://i39.tinypic.com/2md1grp.jpg
did you get yours yet?

Wow! That is really nicely done! No, I didn't end up getting it done as my preferred artist wasn't confidently about creating smooth concentric circles. A friend of mine did also recently get this tattoo across her shoulder - it really is awesome!

Down the inside of your torso from your hip up towards your armpit.

Check out: http://www.stylish9.com/cool-arm-tattoo-for-men.htm - not sure how true it stays to the original, but on the right track at least!